In 2008 I attended a press conference in Brussels hosted by Eurocontrol and IFATCA. At the conference David McMillan, then Director General of Eurocontrol and Marc Baumgartner, then President of IFATCA introduced the principles behind 'Just Culture'.

At the time it was a relatively new concept, but now it is well-established in the aviation and ATC industry. But there is a lot more work needed and being done to develop these principles. 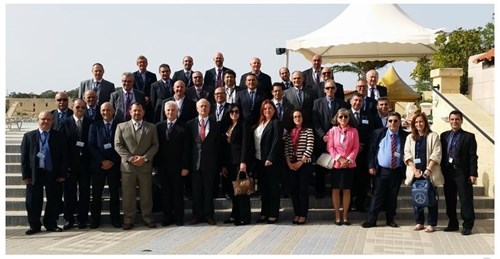 “If Safety is a hot issue, so is Just Culture. It is always a challenge to know what is happening in the operational and technical areas. Yet, the credibility of the CEO, the Safety Manager and, indeed, of the entire organisation depends on where to draw the line between a genuine mistake and negligence or conduct unbecoming.”

With these words, Carmel Vassallo, CEO of MATS (Malta Air Traffic Services Ltd.) opened the Just Culture Regional Workshop on 11/12 May 2016 organised by MATS, the ANSP of Malta, and EUROCONTROL, in Valletta, Malta, with representation from the 4 BLUE MED Functional Airspace Block (FAB) members, Cyprus, Greece, Italy and Malta.

The workshop attracted wide participation among judges and/or public prosecutors from Malta, Cyprus, Greece, Italy and the UK.

Aviation was represented by experts from MATS, EUROCONTROL, aviation regulators from Malta and Cyprus, as well as representatives of the professional associations of air traffic controllers and pilots.

In a first move that proves the growing interest in this subject, as well as its applicability beyond the aviation field, the European Rail Agency also participated, with the intention of extending the principles of Just Culture as developed by EUROCONTROL to the rail industry.

The workshop addressed key issues such as the balancing act between aviation/transport safety and the administration of justice, highlighting the common interest for the safety of the public that both aviation safety and the judiciary have at their heart. All parties agreed that there is significant ground for cooperation and mutual benefit from this work, as the Cyprus Representative of the Prosecutors indicated: “the Just Culture – Prosecutor Regional Workshop in Malta offered an excellent opportunity in establishing a dialogue between the aviation stakeholders and the Prosecution”.

This is a video made by Eurocontrol in 2014 that discusses the need for an open, honest dialogue to improve working conditions and safety.