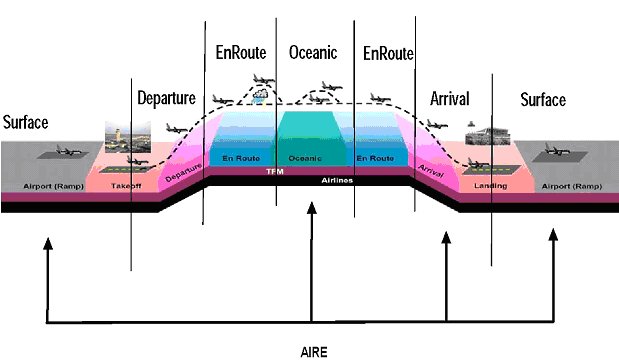 Ground movement: On average, aircraft are responsible for only about half of the emissions produced at and around airports . The airport-related emission sources are generally categorised under aircraft emissions (aircraft engines and auxiliary power units), aircraft handling emissions (mainly ground support equipment, airside traffic, aircraft de-icing and refuelling), infrastructure or stationary sources (surface de-icing, power/heat generation plant, construction activities, etc.) and all vehicle traffic sources associated with the airport on access roads. Green ground movement trials with Air France at Paris CDG (in cooperation with the DSNA and Aéroports de Paris) will seek to demonstrate the effectiveness of a new collaborative decision support system which will minimise taxi time and allow for single engine taxi operation, thanks to enhanced time predictability. Terminal: Airports are one of the bottlenecks of the present air traffic management system. Air traffic flows are managed on a first-come, first-served basis leading to unnecessary fuel burn, as air traffic control (ATC) often requires aircraft to level off and hold at intermediate altitudes during descent. Green approach (Continuous Descent Approaches) and green climb trials at Madrid, Paris CDG and Stockholm airports involving DSNA, Thales, AVTECH, LFV, Novair, Egis Avia, AENA, INECO, Iberia and Air France are planned. The first Required Navigation Performance CDA approach ever to be performed in Europe is now planned at Stockholms Arlanda airport in cooperation with Airbus. Oceanic: In the present system, ever increasing traffic flows between Europe and North America are leading to inefficient fuel consumption, fewer accepted pilot requests and airline schedule disruptions. Trials for green Oceanic procedures and techniques (speed, horizontal and lateral flight profile optimisation) with Nav Portugal, Isavia involving TAP Portugal, Air France, ADACEL and Icelandair on selected routes between Europe and North/Latin America will be carried out in 2009.
The low-noise and -CO2-emission flight trials are being organised in the framework of AIRE, an agreement between the European Commission and the US Federal Aviation Administration, which aims to develop environmentally friendly air transport operations on transatlantic routes. More than one hundred trials will be performed in 2009. The SESAR programme came to life with the acknowledgment that Europes current air traffic control systems will soon be unable to cope with the growth in flight movements, the number of which will double by 2030 . At the same time, environmental awareness is rising, prompting the need for more efficient operations and better technology. The aim of the newly created SESAR Joint Undertaking is to ensure the modernisation of the European air traffic management system by coordinating and concentrating all relevant research and development efforts in the Community. Founded by the European Community and EUROCONTROL, the SESAR Joint Undertaking also obtains the commitment of the aviation industry. Antonio Tajani, European Commission Vice-President and Commissioner for Transport, had the following to say: Low-emission flights are already possible today; the technology is available and all actors are willing to define together how the system should work. The AIRE programme is the European and trans-Atlantic platform to show that these are not only words but that green procedures are possible and that they fully comply with the most stringent safety requirements. They make flying much more efficient and reduce the costs and the effects on the environment and on the people living around airports. I am confident that we will soon put green procedures into daily practice. EU-US green flight cooperation called AIRE The Atlantic Interoperability Initiative to Reduce Emissions (AIRE) agreement between the European Commission and the United States is a programme which aims to improve energy efficiency, and lower engine emissions and aircraft noise. By taking advantage of air traffic management best practices and new technologies, it expects to accelerate the implementation of environmentally friendly procedures for all phases of flight, and to validate the benefits of these improvements. The SESAR Joint Undertaking is responsible for the management of AIRE from a European perspective. AIRE in practice: more than 100 trials and 17 partners Under this initiative, airlines, air navigation service providers (ANSP), the manufacturing industry and airports are invited to capitalise on present avionics technology and work collaboratively in order to perform integrated flight trials and demonstrations validating solutions for the reduction of CO2 emissions. The SESAR Joint Undertaking will support more than one hundred trials scheduled to take place in 2009 with seventeen partners: Airbus, Air France, the French ANSP DSNA, Aéroports de Paris, Thales, ADACEL, AVTECH, Egis Avia, Nav Portugal, TAP Portugal, Isavia, Icelandair, AENA, INECO, Iberia, LFV and Novair. Patrick Ky, Executive Director of the SESAR Joint Undertaking, made the following point: Greener flight procedures could reduce the environmental impact per flight by 10%. To make this happen, we need to validate these new procedures under real operating conditions. Each flight demonstration and trial project will aim to demonstrate the environmental, operational and economical benefits which modern, environmentally friendly solutions will bring to air traffic management. To take an example of a Stockholm to New York flight operated with an Airbus A330, todays consumption is about 46 tonnes of fuel, equivalent to 144 tonnes of CO2. It is estimated that thanks to greener air traffic management, savings in the range of 10% could be achieved, which in this example would a 4,6 tonnes reduction in fuel burn or a 14,4 tonnes reduction in CO2 emissions. These trials will be conducted for ground movements and also terminal and oceanic procedures. In certain cases, outcomes of these trials will be coupled in order to have a gate-to-gate view of the flights.