Service Provision Award (for the contribution to safe and efficient airspace management) Winner - ASPIRE partnership The Asia and South Pacific Initiative to Reduce Emissions (ASPIRE) partnership includes the FAA, Airservices Australia and Airways New Zealand. The partners have pledged to promote procedures and technologies to develop shared performance measurements on emissions. Between September 2008 and November 2008, three ASPIRE test flights demonstrated reductions in fuel and carbon emissions as a result of green procedures. 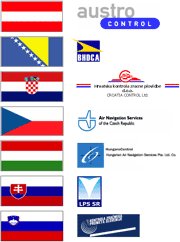 Contribution to European ATM Award Winner - ATM FAB CE FAB-CE is a Functional Airspace Block initiative involving the ANSPs of Austria, Bosnia Herzegovina, Croatia, the Czech Republic, Hungary, Slovakia and Slovenia. A declaration of intent was signed in June 2008, and on 18 November a framework agreement was signed to establish working arrangements and prepare a formal memorandum of understanding.

Enabling Technology Award (for contribution to enhanced capacity and safety) Winner - Kazaeronavigatsia and Lockheed Martin Kazaeronavigatsia has since the mid-1990s sought to upgrade the ATM infrastructure in Kazakhstan. The Kazakh national ATM system will ultimately comprise four area control centres in addition to multiple terminal and remote tower systems. Initiatives to date with Lockheed Martin include the modernization of the Aktobe Area Control Centre and the introduction there of an Omnyx air-defence system.

All the nominations were of an extremely high standard, highlighting the advances across the air traffic control sector and demonstrating the latest technological solutions available today. The winners represent the best achievements by industry players over the past year. The judges made their selections from nominations including flight efficiency programmes, safety initiatives and technical developments aimed at making flying safer and greener in the future.

Future Systems Award (for developing next-generation technology) Winner - MUAC and Indra Sistemas MUAC on 12 December 2008 began using a new flight data processing system (FDPS) developed by Indra Sistemas. The FDPS is the first to comply with European specifications set in 2000. Featuring next-generation technologies such as increased automation, controller-pilot datalink and medium-term conflict detection, it can handle triple the traffic of its predecessor while supporting data exchange across all sectors and with adjacent ATC centres.