Aireon announced today that it has signed a Memorandum of Agreement (MOA) with Spanish Air Navigation Service Provider (ANSP) ENAIRE. Through this agreement, ENAIRE will begin investigating the safety, efficiency and environmental benefits of deploying space-based automatic dependent surveillance-broadcast (ADS-B) technology in its airspace.

ENAIRE controls more than 2.2 million square kilometres of airspace including the Iberian Peninsula, minus Portugal, the North Atlantic, Western Mediterranean, Ceuta and Melilla, the Canary and Balearic archipelago. Through this airspace, ENAIRE manages approximately 2 million flights per year that include routes over oceanic airspace including the northern portion of the Madrid Flight Information Region (FIR) and the majority of the Canary FIR. Space-based ADS-B would for the first time offer ENAIRE 100 percent, real-time visibility for all of its airspace, including remote and oceanic regions.

“ENAIRE already has extensive experience with ground based ADS-B, making reviewing the capabilities of space-based ADS-B in both the European and Canary environment a very attractive option,” said Enrique Maurer, chief technology officer, ENAIRE. “We look forward to fully examining how space-based ADS-B could address the challenges associated with the European ADS-B mandate as well as its benefits to achieve a more cost-effective contingency layer.” Aireon’s space-based ADS-B system is scheduled for completion in 2018, upon total deployment of the Iridium® NEXT satellite constellation. On January 14, 2017, the first ten satellites were launched by SpaceX from their west coast launch facility at Vandenberg Air Force Base. Seven additional launches are scheduled to take place over the next 12 to 15 months. Space-based ADS-B will offer ANSPs total real-time surveillance of all their airspace for ADS-B equipped aircraft.

“ENAIRE operates complex and non-contiguous Flight Information Regions that can benefit from the implementation of space-based ADS-B in various ways,” said Vincent Capezzuto, chief technology officer and vice president of engineering, Aireon. “In addition to real-time visibility into the challenging Canary FIR, our system can offer a low barrier to entry for full ADS-B coverage in Spain's busy airspace.” 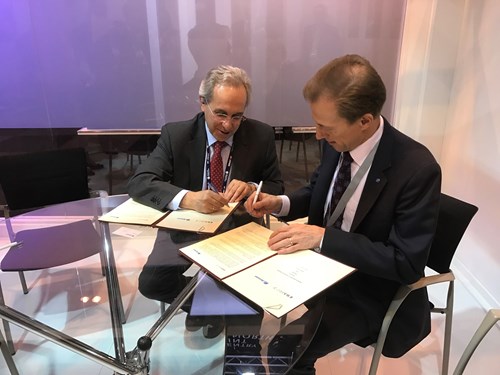