Malaysia flight MH370 went missing in March 2014 after it left Kuala Lumpur. Extensive searches in the Indian Ocean for the Boeing 777 resulted in no results. Sixteen months later debris of such a plane has now washed ashore on the island of Reunion?

The Island of Reunion is about 4000 km west of where the plane was thought to go missing. According to oceanographers it is possible the Indian Ocean current and it’s given time frame could transport certain parts of debris this far away. Especially since there has also been two cyclones in the area.

Malaysia and Australia both have sent teams of experts to the Island of Reunion, a French overseas department in the Indian Ocean, to investigate the debris. Their priority is to identify serial numbers of the pieces of debris to make sure the wreckage can be identified as that of flight MH370. Objects of the plane have already been sent to France (Toulouse) for further inspection, but it will take at least another 12 to 24 hours before any results are expected.

"The discovery of debris on a remote island in the Indian Ocean is "a very significant development" in the search for Malaysia Airlines Flight 370, but it's too soon to say whether the part is from the missing aircraft”, said Australian Deputy Prime Minister Warren Truss.

When flight MH370 left Kuala Lumpur in March last year it carried 239 people which are all presumed dead. For the relatives of these people the identification of this debris as a Boeing 777 will hopefully bring closure, as there are no other incidents reported in this region with this type of aircraft. 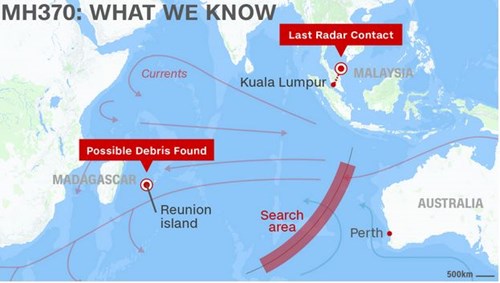