Although Europe still has a long way to go to achieve cost-effective air traffic control, the latest ATM Cost-Effectiveness report from Eurocontrol's Performance Review Unit (PRU) documents significant improvements over the last four years. The report provides a number of measures of productivity and cost-effectiveness for European airspace overall and for 37 individual air navigation service providers (ANSPs). Overall EU-wide targets were agreed upon in December 2010 for cost-efficiency, airspace capacity, and environmental performance. This report deals only with the first of these, and its data for the past four years suggest that the target for a Europe-wide decrease in ATC unit costs of 10% by 2015 is achievable.

Over the previous four year-period, controller productivity increased by 8.9%, more than offsetting the hourly labor cost increase of 7.3%. But because support costs (other ATC and overhead expenses) also went up, the overall ATC cost per flight hour decreased only 0.3% over this period, Europe-wide. However, there was considerably more progress in 2010 compared with 2009. Labor cost per controller hour decreased 5.1% while controller productivity grew by 6.6%, leading to an overall 6.8% decrease in ATC cost per flight hour Europe-wide. A considerable fraction of that overall improvement was due to the major ATC labor law reform in Spain, which led to a large increase in regular hours worked and a significant reduction in very expensive overtime.

What I found especially interesting was the huge variation in costs and productivity among the 37 ANSPs. The overall ANSP cost per composite flight hour ranged from a high of Euros 725 in Belgium to a low of Euros 173 in Estonia. The PRU analysts looked into possible causes for this variability, including overall traffic levels, the density of traffic, and the complexity of traffic. Those ANSPs with the highest unit costs tend to have airspace with a combination of high density and high complexity: Belgium, Germany, the UK, Switzerland, the Netherlands, Austria, and the Czech Republic. But most of those ANSPs also have very high productivity, as indicated by the following table: 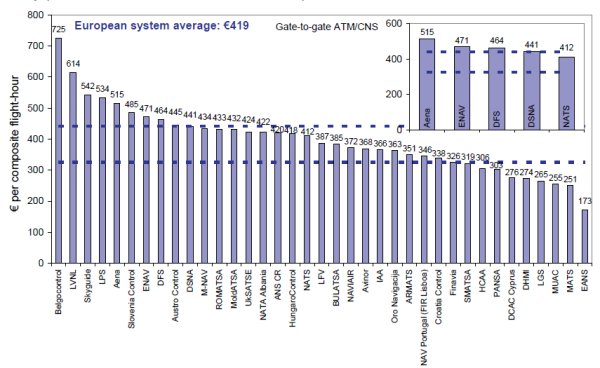 As you can see, Belgocontrol is clearly an outlier, with much lower productivity and higher unit cost than the other ANSPs dealing with dense, complex air traffic. (The #1 rank in productivity goes to Eurocontrol's Maastrict district, but since it controls only high-altitude airspace, it is not strictly comparable to the other ANSPs in the table.)

As I've written here previously, one of the key means to the end of a more cost-effective Single European Sky is to take advantage of economies of scale by providing air traffic management using far fewer facilities. The PRU's analysis lends support to this premise, by finding that the least productive (albeit mostly lower-cost) ANSPs are those of small size serving areas with low traffic volume and high seasonality. "Most of the ANSPs that achieved or are close to the top quartile in [controller]-hour productivity are among the most complex ANSPs. On the other hand, [those ANSPs] which belong to the least-complex grouping . . . show a [controller]-hour productivity which is lower than the [average of] the bottom quartile."

We don't have directly comparable figures for ATC productivity and cost-effectiveness in the United States. But I strongly suspect that if someone were to compile data on operations per controller-hour and cost per operation, we would see comparably large variations among the Air Traffic Organization's 167 TRACONs and 20 Centers. Meanwhile, to get some indication of whether ATC productivity in this country is increasing or decreasing, I pulled together some numbers from FAA documents, comparing en-route IFR operations each year and the FAA's Operations budget for that year. For the same period 2006 through 2010 in which Europe-wide cost per composite flight hour decreased by 0.3%, in this country the cost per IFR operation increased by 21.7%. (And over the 10-year period 2000 to 2010, that number grew by 42.4%.) The European and American figures are not identical measures; I merely point out the sharply contrasting trends.