Budapest Airport (BUD) has hosted a Chinese logistics and investment delegation for a one-day logistics forum that focussed on cooperation and e-commerce, as a new direct service between Hungary and China is to open this summer.

The BUD cargo team welcomed representatives from the Shanghai Cross-border E-commerce Association (SCEA), and Invest Shanghai, among others, to a day-long workshop and tour of the facilities, organised by the Hungarian Investment Promotion Agency (HIPA) and the Consulate General of Hungary, Shanghai last week.

“This year marks 70th anniversary of establishing diplomatic relations between Hungary and China, and launching a direct flight between Budapest and Shanghai will provide further impetus in enhancing relations in all fields, especially tourism and logistics,” said Szilárd Bolla, Consul General of Hungary, Shanghai, China.

“I see a great business demand for the cargo capacity of this newly established flight we have been working on for a long time, and I believe there is a strong potential for Budapest to become a regional logistics hub for Chinese enterprises.

“This forum provided a great opportunity to show this potential to important Chinese industry players.”

“We warmly welcome Budapest as our newest online destination within Europe,” said Li Jiupeng, CEO of Eastern Air Logistics Co., Ltd. (EAL); Chairman of the Board of China Cargo Airlines and Chairman of the Shanghai Cross-border E-commerce Association (SCEA)

“We are confident that this will be a valuable addition to our network, which will act as the major air cargo linkage between Shanghai and Hungary.”

As part of the workshop, the delegates visited BUD’s cargo facilities, including the site of a dedicated air cargo facility which is set for completion in Q4 this year.

“There are a lot of opportunities ahead of us and we are proud to announce that in the space of only a year, we will be able to open a state-of-the-art 35,000 m2 air cargo facility called BUD Cargo City at Budapest Airport, said Rene Droese, Director for Property and Cargo at Budapest Airport.

“We see more and more interest among Hungarian export-oriented sectors like the automotive, pharmaceutical, and electronics industries in the development of air cargo in Hungary and it is our mission to support this drive with further developments.

"We strongly believe in our great potential for more air cargo capacities between Budapest, Shanghai and other Chinese logistics gateways.”

BUD is establishing itself as the Central and Eastern air cargo hub, with volumes increasing by 60 per cent since 2015.

As part of the workshop, the delegates visited BUD’s cargo facilities, including the site of a dedicated air cargo facility, which is set for completion in Q4 this year. 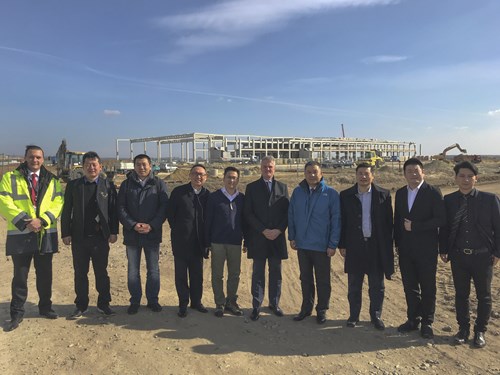