CANSO and ENAIRE have held a strategic bilateral meeting to discuss the challenges that the European Aviation is facing and to make more vivid the CANSO-ENAIRE cooperation.

CANSO is the worldwide organization representing the interests of air navigation service providers (ANSPs), of which ENAIRE, the Spanish ANSP, is a founding member since 1998.

The new CANSO Director Europe Affairs, Tanja Grobotek, the CANSO Deputy Director General, Simon Hocquard had the oppoortunity to discuss with Ángel Luis Arias, Director General of ENAIRE, and his team the current challenges of the European Aviation and to better comprehend the particularities of the aviation sector in Spain.

The event proved to be very fruitful for both parties involved: ENAIRE took the chance to share with CANSO its views on key topics like – Single European Sky, future of air traffic management (ATM) in Europe and main ATM challenges in the short term.

Today meeting brought to further positive thoughts; CANSO and ENAIRE discussed the challenges of the European aviation, decided to strengthen their cooperation and agreed on the need to all stakeholders to work together to create a truly Single European Sky and ensure that passengers receive total quality of service.

After the bilateral meeting with ENAIRE, CANSO had the opportunity to elaborate its activities at global level and in Europe to Spanish aviation stakeholders such as Spanish CAA and NSA (AESA), Spanish Air Force, AENA (Spanish Airports), Airlines Associations and Spanish ATM Industry, to provide a platform to respond to challenges in ATM, and to create an environment for ANSPs to enhance ATM performance through collaboration. 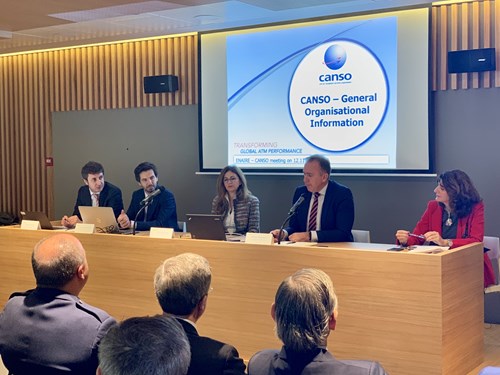