Special Bulletin Magazines
CANSO, the Global Voice of ATM, today announced its Middle East Declaration, a statement committing the members of its Middle East Office and other aviation stakeholders in the region to work together to improve Air Traffic Management across the Middle East. 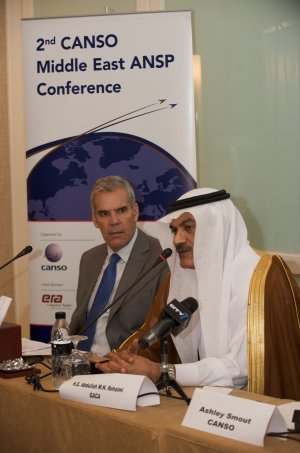 The Declaration was endorsed on January 25 by all the organisations attending the CANSO Middle East High Level meeting. Representatives included all the Members of the CANSO Middle East Region, key civil aviation organisations and ANSPs, Airlines, IATA, ICAO, and several important industry suppliers. The Declaration acknowledges the importance of aviation in the Middle East and recognises the importance of a collective response by all stakeholders aviation business sectors, States and international organisations to cooperate to meet the unprecedented challenges facing air navigation services in the region. It endorses the CANSO Middle East REDSEA vision to Realise, Enhance and Develop Seamless Efficient Airspace through a seven-pillar high-level strategy and four work programmes, and it aims to encourage the successful transformation of ATM in the region. COMMENTS: His Excellency Abdullah M.N. Al-Rehaimi, President of GACA Saudi Arabia said: I am delighted and honoured to have been elected Chairman of the Middle East CANSO CEO Committee (MEC3). GACA is determined to help facilitate closer cooperation between the aviation stakeholders in the Middle East and we are committed to supporting CANSO and its objectives. The Middle East Declaration reinforces the will of all the aviation sectors in the region to deliver improved air navigation services and on behalf of the MEC3 I look forward to a successful implementation of the CANSO Middle East work programme, based on our vision and High Level Strategy for the region. His Excellency Saif Mohammed Al-Suwaidi, Director General of UAE General Civil Aviation Authority (GCAA) said: On behalf of GCAA I am pleased to see CANSO develop to the benefit of the region. GCAA has recently joined the CANSO family but we have already seen the benefits that come from being part of a worldwide network of ANSPs. As a progressive and leading ANSP, GCAA is working with our partners to take advantage of the best practices and new technologies developing in ATM and I am sure that in the spirit of this Declaration, the Middle East ANSPs will lift their capabilities to a new level. Alan Stealey, Division Senior Vice President: Flight Operations for Emirates, said: Emirates is delighted to be a part of the High Level Strategy for Middle East ATM which has been agreed today and committed to in this Declaration. As the largest carrier in the region, Emirates recognises that it has a responsibility to work with its partners to improve the air traffic system, and we are pleased that the ANSPs have demonstrated this collective leadership to work cooperatively for the benefit of all. Ashley Smout, CEO of Airways New Zealand and CANSO Chairman, said: The Middle East Declaration marks a major step forward in the transformation of ATM in the Middle East. It leads the way for the future development and harmonisation of air navigation services in the region and on behalf of all the CANSO members I want to congratulate the leaders of GACA, GCAA, NANSC and SERCO, along with all our partners in the High Level Group, for their far-sighted commitment to this work programme. Graham Lake, CANSO Director General, said: CANSO is the global voice of ATM, and today the voice has spoken in the Middle East. Together with the vital support of our partners and customers in the region, we look forward to proactively working together to improve the capacity, performance, safety and efficiency of Middle East ATM.
You can view the decleration at http://www.canso.org/middleeastdeclaration