The CANSO Global ATM Summit and 23rd AGM brought together the leaders of airlines, airports and air traffic management (ATM) to work towards enhancing the safety, efficiency and harmonisation of airspace and recognise the significant achievements already made.

During the industry leaders’ discussion, Alexandre de Juniac, Director General of IATA, paid tribute to air navigation service providers (ANSPs) who keep the skies safe. As well as safety, he said that the airlines’ expectations of CANSO Members were: efficient, reliable and cost-effective air traffic management; sufficient capacity in the face of rapidly growing air traffic; and greater transparency, consultation and collaboration between ANSPs as well as between ANSPs and stakeholders such as airlines and airports.

In addition, Angela Gittens, Director General of ACI, emphasised that the reliable and effective transmission of data is crucial to improving operational efficiency, particularly collaborative decision making (CDM) between airports, airlines and ANSPs. A major concern for airports was the impact of aviation noise on local communities and she was pleased that CANSO and ACI were currently working on a joint publication on managing noise.

During the event, CANSO signed a memorandum of understanding with IATA on enhancing airspace capacity, integrating new airspace users such as drones, implementing air traffic flow management, and other areas of collaboration.

CANSO Members also agreed a resolution to: modernise ATM, increase capacity and improve operational efficiency; push regulators for more effective performance-based regulation to speed up implementation of new technologies; advocate for an integrated approach to airspace management;  enhance global interoperability by pursuing the adoption of open source system standards; and ensure a deeper understanding of the proactive actions that the ATM industry is taking to meet today’s complex challenges and to prepare for the challenges of tomorrow.

In addition, Members approved the creation of a new, separate intermediate Membership category for Specialised Service Providers. These are defined as: any organisation that provides services intended to avoid collisions between airborne capable vehicles (manned and unmanned), and to maintain an orderly flow of air traffic.

For the inaugural CANSO Award of Excellence in ATM, six companies shortlisted presented their projects, and CANSO Members voted for the winner. The Award was given to Aireon, NATS and NAV CANADA for their joint project to deploy space-based ADS-B in the North Atlantic.

The CANSO Global ATM Summit and 23rd Annual General Meeting, hosted in Geneva by skyguide, with Aireon as Lead Sponsor, was attended by a record 275 delegates from around the world. The CANSO Global ATM Summit 2020 and 24th AGM will take place in Baku, Azerbaijan, 8-10 June 2020, hosted by Azerbaijan Air Navigation Services Department (AZANS). Members voted to hold the 2021 Summit and 25th AGM in Berlin, hosted by DFS. 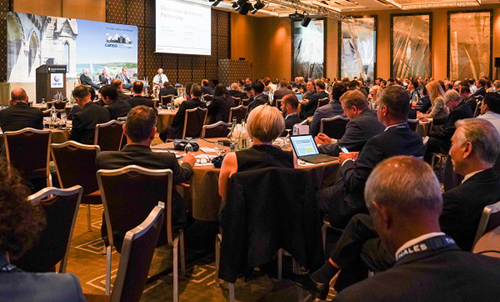