Bremen Airport, in the north of Germany, was the setting for a German first. It was the first time that a passenger aircraft landed in Germany using a new satellite-based precision approach procedure without the aid of the conventional ground-based navigation infrastructure. This was made possible by EGNOS (European Geostationary Navigation Overlay Service), a satellite-based augmentation system (SBAS) that supplements GPS and other satellite navigation systems. It improves the position accuracy of GPS from 10-20 metres to 1-3 meters. Bremen is the first airport in Germany to have implemented a precision approach procedure using SBAS.

SBAS provides an innovative alternative to the conventional instrument landing system (ILS) and can also be used in poor weather conditions. DFS has thus provided airspace users in Bremen with a workable alternative to the old system. This is not the first time that Bremen Airport was on the cutting edge of air navigation technology. In 2012, the world's first approach using a ground-based augmentation system (GBAS) for satellite navigation was employed.

The International Civil Aviation Organisation ICAO approved the satellite-based SBAS precision approach procedure, giving it the name "LPV 200". The procedure can be implemented in poor visibility for category I (CAT I) weather conditions, one of three levels of all-weather operations. The pilot is guided down to a height of 200 feet above ground, that is about 60 metres, using satellite-based technology that guides the aeroplane horizontally and vertically. When the pilot has the runway in sight, it is safe to land.

Up until now, it has only been possible to guide aircraft to what is known as the "decision height" by means of ground-based systems such as ILS or systems such as GBAS, which supplement the satellite guidance with a ground-based station. The new SBAS technology offers clear advantages compared to conventional approach procedures. In addition to being an extremely precise alternative to ILS, SBAS does not require ground infrastructure that is expensive to operate and requires a lot of maintenance.

EGNOS geostationary satellites supplement GPS signals to achieve the high degree of precision for the SBAS procedure. Together, they fulfil the requirements needed for precision approach procedures and comply with ICAO standards.

"In the medium- and long term, DFS is planning on making more use of satellite-based navigation for approaches and thus create an alternative to the traditional ILS category I," explained Andre Biestmann, Director of Airspace and ANS Support at DFS.

Aircraft cockpits have to be equipped with EGNOS receivers to be able to receive the satellite signals. A majority of the NetJets company's aircraft in Europe are already equipped with this new technology and it was a NetJets aircraft that conducted this first SBAS approach in Bremen.

The modern fleet of NetJets makes the company an important contributor to aviation innovation. In autumn 2016, NetJets and DFS tested the latest approach procedures with GBAS. This project was awarded an innovation prize by the European Commission in early March 2017 as part of the Augmented Approaches to Land project.

Not all aircraft manufacturers equip their aeroplanes with EGNOS receivers. DFS believes that incentives will have to be created so that aircraft can be equipped with this technology in the long term.

DFS Deutsche Flugsicherung has operated a ground-based augmentation system (GBAS) at Bremen Airport since February 2012. This type of approach procedure also uses the satellite signals of the US global positioning system (GPS). The ground-based antennas provide data that improve the precision of the satellite data and then send this information to the approaching aircraft. The SBAS procedure does not use this type of ground-based facility. 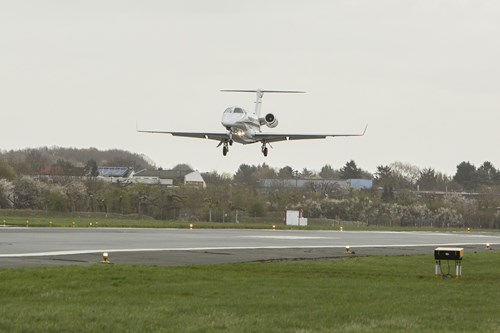 First SBAS approach in Germany at Bremen Airport on 6 April 2017. 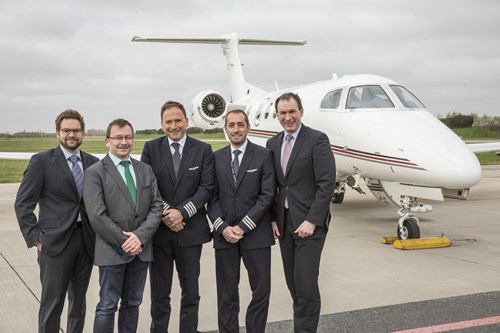