On 4 December, air traffic controllers from DFS, the German air navigation service provider, began controlling traffic at Saarbrücken Airport from a site 450 kilometres away to the east in Leipzig. This is the location of the new DFS Remote Tower Control Centre, which began operations today. Using high-definition video and infrared cameras, air traffic controllers can monitor traffic in the air and on the ground from there. Saarbrücken is the largest airport in the world where daily operations are controlled remotely. After a four-week introductory phase, remote tower control will become part of regular operations. Over the next years, DFS will use the new technology to control traffic at Erfurt and Dresden airports from Leipzig as well.

From today, the air traffic controllers handling traffic at Saarbrücken Airport sit in Leipzig in the east of Germany. This is the location of the Remote Tower Control Centre, which DFS has set up at its branch at Leipzig Airport. Air traffic controllers will now be able to keep a close eye on traffic at the airport without needing to look out of the tower cab. A combination of video and infrared cameras deliver a permanent 360-degree view of the airport. The panoramic image is displayed on a row of monitors set up above the controller working position. Controllers can select which section of the image they want to focus on. Pan-tilt-zoom video and infrared cameras have also been set up, allowing the smallest detail to be seen. Static cameras are used to monitor the Apron.

The air traffic controllers have a much better view thanks to the infrared technology, especially during bad weather and at night. In addition, the remote tower control system supports the controllers in their work. It automatically detects movement and highlights aircraft in the air and on the ground, as well as other vehicles, on the monitors. The aircraft taking off and landing can either be tracked manually or automatically using the pan-tilt-zoom cameras. For safety reasons, all optical functions are designed redundantly. The camera housings are heated and the cameras have an automatic cleaning function. The cameras are installed on a camera tower in eyeshot of the old control tower.

"Our remote tower system is an example of how new digital technologies can be used innovatively in the aviation sector, " said DFS CEO Klaus-Dieter Scheurle. "We are improving our efficiency while maintaining the high standards of safety DFS requires." The system developed by DFS is unique. "We have established a new standard in the world of remote tower technology."

It is normal that air traffic controllers have no direct line of sight to the aircraft they control. The only exception had been tower controllers. DFS has long monitored air traffic in German airspace remotely from its four large control centres in Langen, Bremen, Munich and Karlsruhe. "It's a logical next step to control take-offs and landings remotely," said Scheurle. While maintaining the high safety standard, the introduction of remote tower technology to German airports should lead to cost-savings and allow air traffic controllers to be deployed more flexibly. "Until now, remote tower solutions had been an option for very small airports with low levels of traffic only," said Scheurle. "Our system allows us for the first time to control a large international airport around the clock from one external location."

DFS developed its remote tower system together with the Austrian high-tech company Frequentis, while the video and infrared sensors come from the German group Rheinmetall Defence Electronics.

Overall, four years were needed for the development.

A joint venture has been set up between a DFS subsidiary DFS Aviation Services and Frequentis for the national and international marketing of the DFS remote tower system. The joint venture is called Frequentis DFS Aerosense.

Ten air traffic controllers from Saarbrücken have transferred to Leipzig. Over the next years, DFS will transfer the control of Erfurt and Dresden airports there, too. The plan is to have the air traffic controllers progressively acquire all the ratings needed to control air traffic at all three airports, not just one. DFS can then deploy its personnel more efficiently and react more flexibly to changes. The costs for operating buildings and the associated infrastructure will also decline. Without remote tower control, DFS would have had to construct a new control tower at Saarbrücken Airport.

A Luxair regional airliner was the first aircraft whose landing was controlled from the DFS Remote Tower Control Centre. The aircraft, a Bombardier DHC 8-400 from Luxembourg, touched down on the runway in Saarbrücken at 6:51 hrs on 4 December.  At 6:53 hrs, a regional aircraft of the same airline was the first aircraft to receive a take-off clearance from Leipzig. The aircraft, a Bombardier CRJ 700, took off on schedule and headed for Berlin Tegel Airport. The last aircraft controlled from the old tower took off on 3 December at 22.01 hrs. The destination of the Luxair flight was Luxembourg.

The tower in Saarbrücken will remain operational at first after the control of air traffic is transferred from Saarbrücken to Leipzig. After a four-week introductory phase, the remote tower control system will become part of regular operations at DFS. 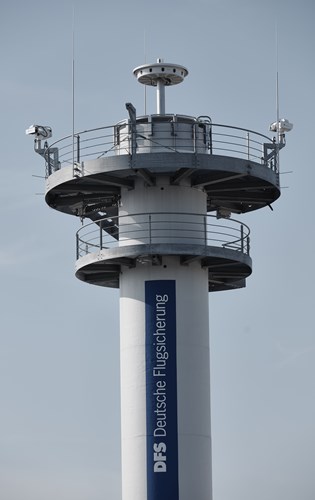 A combination of video and infrared cameras deliver a permanent 360-degree view of the airport. 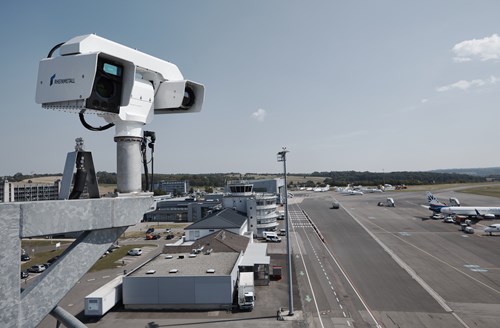 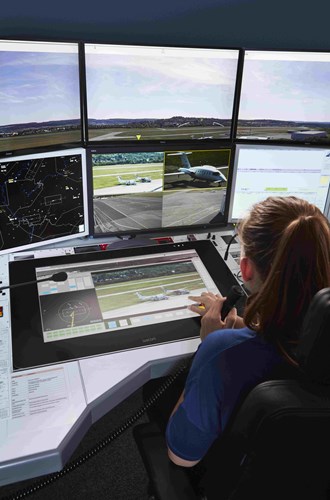 Ten air traffic controllers from Saarbrücken have transferred to Leipzig. Over the next years, DFS will transfer the control of Erfurt and Dresden airports there, too.