The new Dispatcher Tool gives the flexibility to perform an aerodrome RAIM check in a small browser window saving screen space for other applications; an important requirement for dispatchers with busy PC desktops to manage. The interface has been specifically tailored so that it requires only the key data that dispatchers require for their routine operations: aerodrome searchable by ICAO or IATA code, date & time, customisable GPS receiver configuration selection and PBN integrity level. The output has been simplified for the dispatcher's convenience, reducing the workload and streamlining the entire process.

The screenshots below show some examples of the simplified interface for dispatchers: 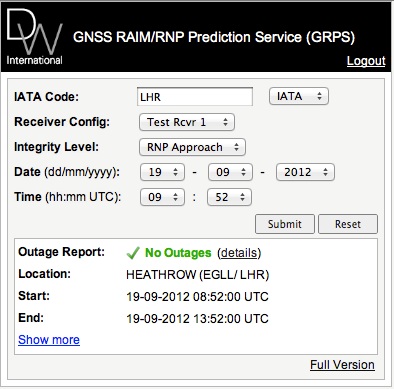 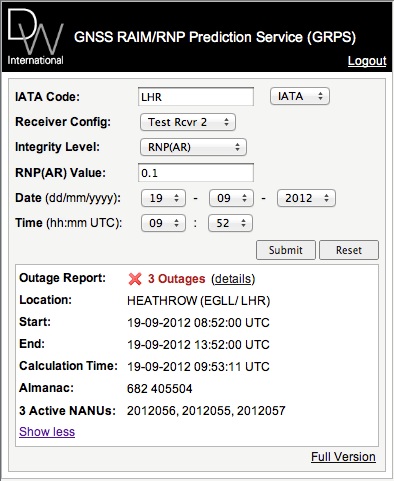 The enhanced data management feature allows closer control of the information resources used to create scenarios for predictions and alerts users to the provenance of stored data and to any alterations made to the data. The objective is to present all relevant information to the users at the time they perform a RAIM prediction requiring the minimum workload for dispatchers and maximum control for the user administrator.

Clients include international agencies, national administrations, airports, airlines and equipment manufacturers and the company is closely involved in the development of future CNS/ATM policy and standards and maintains a high profile on a number of panels and working groups supporting ICAO, EUROCONTROL and EASA. We are also actively involved in the Civil GPS Interface Committee.