The economic crunch will take a big bite out of European air traffic in 2009, with a predicted reduction of nearly 5% of flights in 2009 according to the latest short-term forecast issued by EUROCONTROL. 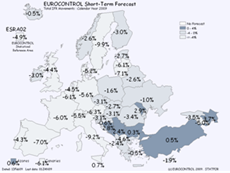 Over the coming year, falls in the number of flights will continue across the board, with some countries, such as France, Italy, Spain, Germany and Sweden set to be particularly affected. The forecast for 2009 is for a decrease across Europe around 5%. According to the forecast, the decline in traffic affects all sectors. Even the low-cost market is not immune in November 2008 it saw its first 12-month decline in 15 years and in February saw 5% fewer flights than February 2008 (even allowing for the leap year). The business aviation market is also declining down by 21% in February 2009 compared to February 2008. The weak trans-Atlantic traffic caused by the economic and financial crisis has wiped out any benefits of the EU-US Open Skies agreement which came into effect last spring. The economic crisis is affecting air traffic on three fronts: reduced output and incomes means fewer goods to ship and lower demand for air travel; secondly, credit difficulties have hindered restructuring and investment by aircraft operators and contributed to bankruptcies; and finally recent migration flows within Europe, which had brought an increase in air travel, now appear to be reversing. As passengers look for cheaper ticket options, yields are falling and load factors remain weak despite airlines cutting capacity in the winter, said David Marsh, Head of Forecasting at EUROCONTROL. All of these factors suggest that this decrease will not be short-lived and the recovery in traffic growth is not expected before the end of 2009 with, at best, weak growth in 2010. Download Short Term Forecast Report Here