Free route is an operational concept in which aircraft operators can formulate flight plans that contain user-defined segments that are planned as direct segments between points in a certain volume of airspace even if said points are not connected by an airway.

This volume of airspace is then called free route airspace (FRA), which is why within Spain, the technical name for this project is HISPAFRA.

The new operation will allow aircraft to fly more efficiently and sustainably between the points defined in the airspace.

Free route is possible only during the flight planning phase. In the tactical phase, the operation is subject to its flight plan and to instructions and clearances from air traffic control.

The HISPAFRA Implementation Plan, part of ENAIRE's Strategic Plan, the 2025 Flight Plan, is scheduled to run through December 2025.

Environmental benefits
According to the European Organisation for the Safety of Air Navigation (EUROCONTROL), once free route operations are fully implemented throughout the European Single Sky, they are expected to save 500,000 nautical miles of flying distance every day.

This means a reduction of 3,000 tonnes of fuel consumed and 10,000 tons of CO2 emissions every day across Europe. The estimated savings in daily fuel costs are 3 million euros.

Operational advantages
For air navigation service providers such as ENAIRE, free route operations simplify and improve the prediction of flight paths, as there is less divergence between the planned routes and those actually flown. 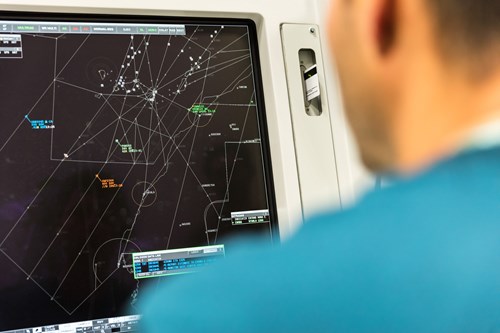