ENAIRE, national air navigation manager, from MITMA has participated today in a Conference on the Strategic Project for Economic Recovery and Transformation (PERTE) and the Aerospace Sector within the framework of the Government's Recovery, Transformation and Resilience Plan (PRTR) from Spain.

The Conference has been organized in Madrid by the aeronautical magazine Fly News with the collaboration of Indra, KPMG, Siemens and ENAIRE.

ENAIRE has presented how it contributes, through the Ministry of Transport, Mobility and Urban Agenda (MITMA), to the Plan for Recovery, Transformation and Resilience of Spain (PRTR) in component 6, with the project "Actions for the Development of the Single European Sky ”.

The direct investments of this Project are part of the Aerospace PERTE, which with its strategic and transversal nature incorporates different actions aimed at positioning the aerospace sector as a key actor in the face of the major transformations expected in the sector on a national and international scale. 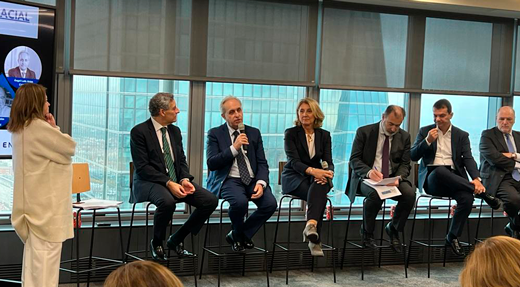 Boost for the sector in Spain and Europe

The general director of ENAIRE, Ángel Luis Arias, underlined in his speech at the Conference that "PERTE Aeroespacial is going to constitute an important boost for the sector in Spain and on a European scale". Regarding the Single European Sky, Arias stressed that "it responds to the objective that the borders between countries are not reflected in the air."

In addition, the general director highlighted the STARTICAL project due to its importance for the Spain brand. In his opinion, "it will be the beginning of a new concept in air traffic management and will have a driving effect on the aerospace industry in Spain."

STARTICAL is a company established by the national air navigation manager of Spain, ENAIRE, and by the global technology and consulting company Indra, with the aim of deploying a constellation of more than 200 small satellites in low orbit that will allow the provision of surveillance and communication services, especially in remote and oceanic areas, without coverage by current air navigation systems based on terrestrial infrastructures.

The ENAIRE actions presented at the Conference on the development of the Single European Sky and the modernization of control systems are indicated below.

Development of a Single European Sky

The Project "Actions for the Development of the Single European Sky" materializes in 25 investment files with a total subsidized amount of more than 107 million euros (PRTR through MITMA).

This investment is distributed in the autonomous communities of Andalusia, Aragon, the Balearic Islands, the Canary Islands, Catalonia, Galicia, Madrid, the Basque Country and the Valencian Community.

The Project "Actions for the Development of the Single European Sky" consists of the following actions:

- Direct investments through ENAIRE aimed at the development of the Single European Sky, related to the modernization of air traffic control systems and surveillance systems, digital transformation, information systems and the evolution of communication systems , as well as the U-Space systems for drone traffic management.

- Digitization of aeronautical documentation (data and cartography) available to users for carrying out flights.

- Expansion of Ground/Air coverage and digitization of voice in pilot-controller communications. Improvement of low-level coverage in certain areas of the airspace by modernizing terrestrial communications infrastructures.

- Technological modernization of the network of primary radars, improving the benefits and orienting the systems to a complete digitalization of these using all the technological advances available to increase the efficiency in the operation.

- Replacement of the hardware equipment of the different ENAIRE systems.

- Development of different management and operation applications for the management of ENAIRE.

- Technological modernization of the navigation systems, prioritizing their complete digitization and the implementation of monitoring solutions and remote control of the systems.

- Digitization and automation of technical exploitation management to improve the remote supervision tools of the systems in an integrated manner.

- Modernization of the air traffic control system to bring it into line with regulatory criteria, incorporating improvements in capacity, operational safety, cybersecurity and digitization concepts, all of which originate from the Single European Sky.

- Actions within the framework of the development of U-Space, which will make it possible to manage simultaneous operations of a large number of drones (autonomous electric vehicles that contribute to the decarbonization and reduction of emissions of atmospheric pollutants) as well as the operation of Aerotaxis (Urban Air Mobility) for a new concept of transporting people.

In particular, the Aerospace PERTE is articulated on different levers, one of which is Sustainable, Safe and Connected Mobility (component 6 of the PRTR), which includes the facilitating measures for the development of the Single European Sky that ENAIRE is executing, with PRTR grant through MITMA. These investments are included in Action 4 of the Aerospace PERTE and are for the Modernization of Air Traffic Control Systems and Surveillance Systems, Digital Transformation and Information Systems and with the evolution of Communications Systems. These investments are focused on three areas: Sustainability, Digitization and Security.

Importance of the aerospace sector in Spain

The aerospace sector is a strategic industrial sector because of its specific weight in industrial production as a whole, because of the role it plays in the innovative ecosystem and because of its capacity to transform the economy and the labor market transversally.

The Government of Spain has prepared the Strategic Project for the Recovery and Economic Transformation (PERTE) of the aerospace sector, aware of its strategic importance, its capacity to mobilize different industrial sectors and the driving effect of its actions in the field of R+D+I, with the fundamental objective that the Spanish aerospace industry becomes a key actor in the face of the new challenges and opportunities associated with the major transformations expected in the sector.

To this end, it will accompany the sector in strengthening its capacities and in the search for solutions to face the economic, social, scientific-technical and regulatory challenges of the coming years, on the essential basis of public-private collaboration.

This PERTE also has an international character since close collaboration with Portugal is proposed, making funds from the recovery plans of both countries available for a common objective, thus generating synergies and increasing the impact. The international nature is extended to the scope of the European Space Agency, with whom collaboration will take place in some of the PERTE actions.

The Spanish aerospace sector ranks fifth in Europe and is estimated to account for around 1.2% of Gross Domestic Product, as well as 5.4% of industrial GDP, according to the documentation presented at the conference. This means more than 37,000 direct jobs and more than 155,000 jobs if indirect and induced jobs are taken into account.