A continuous descent operation is a type of manoeuvre that relies on how airspace is designed, and is facilitated by air traffic control, whereby an aircraft descends using a profile similar to a continuous slope, using minimum engine thrust before the final approach.

In 2021, 36% of the approaches authorised by ENAIRE were continuous descent approaches (CDA), compared to the European average of 18%, according to EUROCONTROL (Performance Review Unit) data from the continent's major airports, meaning CDAs are 18 percentage points higher in the case of Spain.

Specifically, in 2021, the Málaga-Costa del Sol airport ranked first among major European airports in terms of the percentage of CDAs authorised, 47%, with Gran Canaria coming in second at 43%.

Palma (38%), Josep Tarradellas Barcelona-El Prat (36%) and Adolfo Suárez Madrid-Barajas (28%) are among the top 8 in the ranking of major European airports. 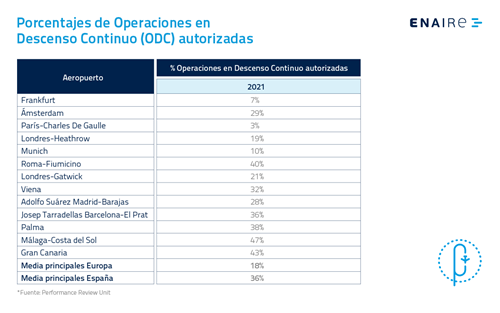 Between January and June 2022, the percentage of CDAs authorised at Spain's major airports was still much higher than in the rest of Europe. In Spain on average, 36% of all approaches authorised by ENAIRE air traffic controllers were CDAs, 21 percentage points higher than the European average in that period (15%).

CDAs not only yield less fuel use and emissions, they also result in a reduced noise impacts on populations near airports.

ENAIRE, in coordination with EUROCONTROL, Aena and airlines, endorses this type of operation at all times, especially at night, as part of its Strategic Plan, the 2025 Flight Plan.

At nighttime, the lower acoustic impact is even more significant, so ENAIRE tries to implement CDAs by default when permitted by air traffic.

ENAIRE's Strategic Plan (2025 Flight Plan), part of its Environmental Sustainability Strategy (Green Sky), specifies as part of its efforts to reduce emissions the use of this type of CDA operation, which require less fuel consumption by aircraft.