ENAIRE, Spain's air navigation provider, placed into service a new state-ofthe-art radar in Espiñeiras, in the province of La Coruña.

This new radar provides coverage and surveillance services for flights in the northeast of Spain, as well as for flights in the Atlantic and in the Bay of Biscay. It will also provide coverage for aircraft taking off from and landing at the Santiago – Rosalía de Castro, La Coruña and Vigo airports.

The new radar provides service to the air control centre in Madrid and to the Santiago terminal control area. ENAIRE has invested more than a million euros - 1,096,075 euros - in this facility.

In total, it will control airspace with a radius of around 250 nautical miles (equivalent to an area of around 670,000 km2).

The Espiñeiras radar provides coverage in the airspace where the areas of responsibility of the Madrid, Lisbon, Brest, Santa María and Shanwick control centres converge. The last two of these are oceanic airspace regions, through which flights from the other side of the Atlantic arrive in Spain.

Due to its strategic location, this radar is shared with the French air navigation service provider (DSNA), and in the future, with the Portuguese provider (NAV Portugal), through the NewPENS European communications network.

It replaces the previous radar

The radar in Espiñeiras replaces the previous civil radar installed in early 2005, and is collocated with a primary radar.

This secondary radar is equipped with digital receivers and Mode S technology, which enable it to receive further information on in-flight aircraft, thereby helping to optimise traffic management and increase safety.

This type of radar is used to monitor and control traffic, as it provides information on the position of each aircraft, its identification and altitude, making it possible to locate and identify all the traffic that is operating within its range.

The radar also includes an Automatic Dependent Surveillance—Broadcast (ADS–B) redundant station, which allows aircraft to be located using the information transmitted by the aircraft's on-board sensors. This feature will ensure that surveillance information remains available in the future in the event of a mechanical failure of the radar station.

This radar joins ENAIRE's nineteen other Mode S radars already installed in Spain, and rounds out the coverage provided in the north of the peninsula. This facility enhances ENAIRE's international standing as an air traffic manager in the field of surveillance, in line with European requirements to phase in new technologies that improve the management of air traffic in Europe.

Secondary Mode S radars and ADS-B stations
The secondary surveillance radar is a system that puts out an information request via a radio signal at a specific frequency received by the aircraft. To receive this signal, the plane responds via a transponder, which decodes the  signal and sends the required information so that on the ground they can identify, in addition to its position, parameters such as the company it belongs to, the route it is taking or the height it is flying at.

The secondary Mode S surveillance radar is an improvement on the secondary monopulse radar, which was being used up until the development of Mode S technology. This radar uses the same frequencies but can carry out selective interrogations, which decreases radio electric
pollution.

Another improvement that Mode S technology brings is an increased capacity to exchange information between the radar and the plane, which means that the aircraft can provide information on its flight plan, intended heading and altitude, and other parameters of the aircraft's flight management system.

Out of all the technology available for improving the provisions of the Spanish surveillance system, Mode S is the most mature and established, allowing for improved operations in various European countries. 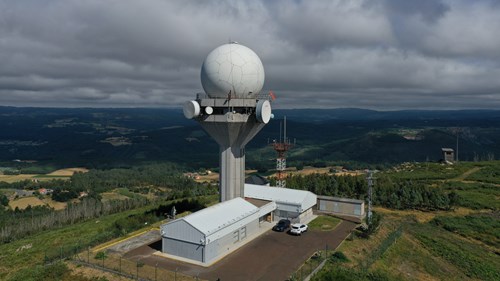