ENAIRE, Spain's national air navigation manager, took part today in a virtual
conference on "Remote towers at airports and their viability in Spain",
organised by the Universidad Pontificia Comillas and the Spanish Association
of Aviation and Space Law, in concert with the Spanish Aeronautical Society.

ENAIRE's presentation, titled "New operating modes: from remote towers to
digital towers", was given by the Director of Air Navigation Services, Enrique
Maurer, who noted that ENAIRE is committed to the digitisation of control
towers, including their remote operation, to enhance their efficiency and
improve their current performance, especially in reduced visibility conditions.
"The trend in air control is digitisation and automation, all supported by
gradual and increasing virtualisation, in combination with the phasing in of
new technological concepts", he stressed.

"Future control towers will feature more digitisation and automation, which
will make it possible for systems to contribute more to the advancement of
the current mode of operation, based on the need for adequate visibility of
the airfield and apron, which will result in improved safety with new alert and
compliance features; improved operations at complex airports; improved
capacity in adverse weather situations; smoother operations and lower
infrastructure costs and operating expenses", he explained. It will also result
in "integrated system information and enhance how traffic is presented
visually and automate this process".

Also taking part in the video conference were representatives from other
entities in the aeronautical sector: Aena, AESA, CEANITA, FSAI, Indra and the
Spanish Aeronautical Society.

A remote control tower entails providing air traffic service (ATS) for airports
from remote locations that have no direct visual access to the aerodrome.
The service provided can be aerodrome control (ATC) or flight information
service (AFIS).

Remote control can be provided permanently, as needed, at certain times of
the day or as part of airport contingency measures.

A remote control tower recreates in an off-site location the view and
functionality of a conventional control tower. 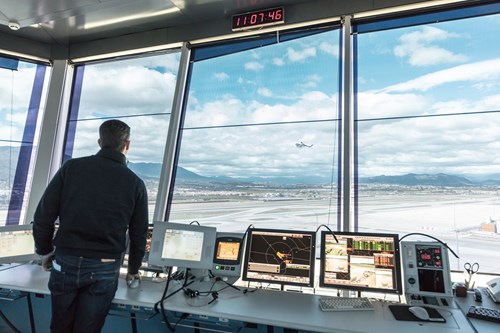