HRH King Felipe VI today opened the eighth edition of the World ATM Congress, featuring 6,000 professionals from 110 countries, and which also includes a new edition of Expodrónica (Drone Expo), with 50 exhibitors. It is being held in Madrid between 26 and 28 October. The King also visited the stand of ENAIRE, Spain's national air traffic manager.

Don Felipe thanked the organisers of this Congress, CANSO and ATCA, for choosing and placing their trust in Spain and the city of Madrid as the host venue. "For our country, which is your country as well, this choice acknowledges the job well done in the eight consecutive editions we had the honour to host, a tradition we hope will continue for many more years to come", he added.

In his opening remarks, Don Felipe highlighted the enormous global challenge posed by the arrival of drones in the world of aviation. "Spain is very active in this regard, both nationally and abroad, and is working closely with our European partners to define the framework of operations, both now and for the near future", he said.

The King took this opportunity to highlight the need to make the Single European Sky a reality: "This European Commission initiative is firmly committed to reducing airspace fragmentation so that it can be used more efficiently, thanks to the latest technologies and to collaborative network management, which allow users to fly more environmentally friendly routes".

He also underscored the importance of "redoubling our efforts to successfully address all the challenges that might come up on our 'navigation chart', starting with safety - clearly our priority - followed by digitisation and new technologies, and, of course, higher environmental standards".

The secretary of Transport, Mobility and the Urban Agenda, who is also ENAIRE's president, Isabel Pardo de Vera, mirrored the King's sentiments. After noting the importance of having the top officials at CANTO and ATCA choose and reaffirm their confidence in Spain as the venue for the Congress, she stressed that "hosting this event is an honour, recognition and responsibility that we accept, with an unequivocal aspiration for continuity and permanence, given our keen awareness of the role of aviation in our country".

After this, Don Felipe, together with Isabel Pardo de Vera, visited the ENAIRE stand, where Angel Luis Arias, the company's CEO, showed them the operation of the EYWA platform, which was presented during the Congress. EYWA relies on Big Data and machine learning, the goal being to transform data into information and information into knowledge, thus optimising organisational and decision-making processes.

This project, designed by SYSRED 24, the ENAIRE unit in charge of the project, will enhance efficiency and productivity by improving the management of complex situations, facilitating decision-making to reduce the impact of incidents.

The day's activities included a conference on advanced drone development and the U-Space concept, led by the Head of Drone Business Development, Daniel García Monteavaro.

ENAIRE is ready to provide U-Space services and for the automated management of drone operations beyond visual line of sight (BVLOS) in airspace volumes called "U-Space airspace". Specifically, ENAIRE will manage CIS (Common Information Services), which are essential to safely support drone operations once the new European Regulation enters into force in January 2023.

As a supplier of common information services, ENAIRE will be the sole facilitator of operational information and data, and interface between conventional air traffic service providers and U-Space service providers, which are the entities that will provide these services to drone operators.

In accordance with the "single CIS Provider" architecture of the U-Space regulation, ENAIRE's U-Space platform will be among the first developments in U-Space systems in Europe to differentiate and centralise the common information services, making this endeavour a benchmark not only in Spain, but internationally as well. 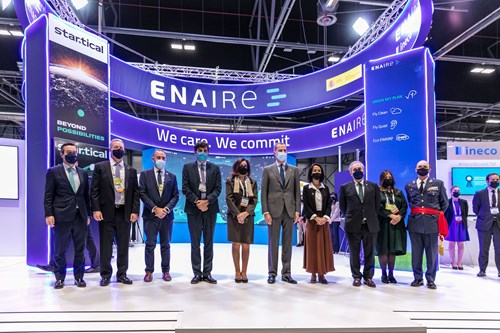