More than 700 ENAIRE workers, including air controllers and technical personnel, lent a hand in the firefighting tasks involving the various fires that, since 17 August, have burned more than ten thousand hectares on the island of Gran Canaria. Their work was essential to managing, from ENAIRE's Control Centre in Gran Canaria and the airport tower, the more than 500 interventions of the aerial assets (hydroplanes and helicopters) employed. Putting out the fire required perfect coordination with the Gran Canaria Airport and the Gando Air Base.

When the first fire broke out in Gran Canaria on 17 August, nothing seemed to indicate that it was going to become the largest so far this year in Spain and one of the most serious in this decade. High temperatures and strong winds favoured the rapid growth of the fire, which made it necessary to evacuate more than ten thousand people and required the use of aerial assets to support firefighters on the ground.

From ENAIRE's Control Centre in Gran Canaria and the airport tower, 577 air controllers, with help from technical staff (145), successfully coordinated the more than 500 hydroplane and helicopter flights, while managing the more than 2,000 commercial flights that took off from or landed in Gran Canaria during this period.

One of the main missions of ENAIRE's air traffic controllers was to facilitate water pick-ups and speed up the work of firefighting aircraft, and combining them with the management of civil aircraft traffic.

To achieve this, ENAIRE was in constant contact with the Gran Canaria Airport, the Gando Air Base and the El Berriel aerodrome, ensuring that hydroplanes and helicopters were able to fly, refuel and pick up water without interfering with civil traffic. This coordination and the work of all those involved, such as the personnel of the airport operator, was essential to extinguishing the fire with the help of aerial assets.

At ENAIRE, we would like to thank all the people and organisations that collaborated in one way or another to combat this fire. Our thoughts are with all those who were affected and with all the citizens of the Canary Islands. 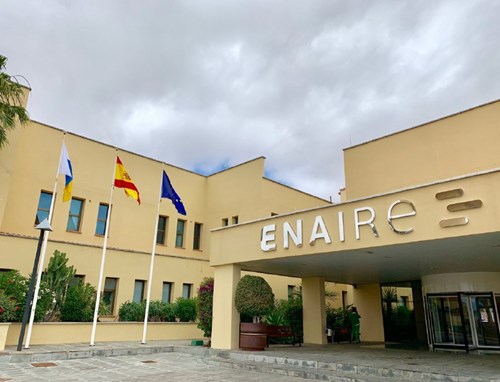