The Single European Sky ATM Research (SESAR) awards for young scientists, presented during the SESAR Innovation Days virtual session, are intended to recognise young scientists who have demonstrated excellence in research fields involving aviation and air traffic management (ATM). These awards give researchers who are just starting their careers an opportunity to further develop professionally by recognising their potential to formulate new ideas and solutions to the challenges facing ATM and aviation.

Our colleague at the Research, Development and Innovation Reference Centre (CRIDA), Christian Eduardo Verdonk Gallego, was recognised for his thesis on "Extraction of Trajectory Contextual Factors and its Application in the Trajectory Prediction using Statistical Methods". While the basic concept of trajectory prediction has been extensively studied, the jury praised Verdonk for adopting a cutting-edge approach that expands the scope of the operational data and factors affecting trajectories and that analyses the air transport system more widely.

The award represents yet another recognition for ENAIRE. Verdonk's thesis, developed at the Polytechnic University of Madrid (UPM), analyses aircraft trajectories from multiple points of view, including factors inherent to ATM systems and traditional factors focused on aeroplanes, and develops predictors based on automatic learning and cognitive abstractions specific to air controllers. 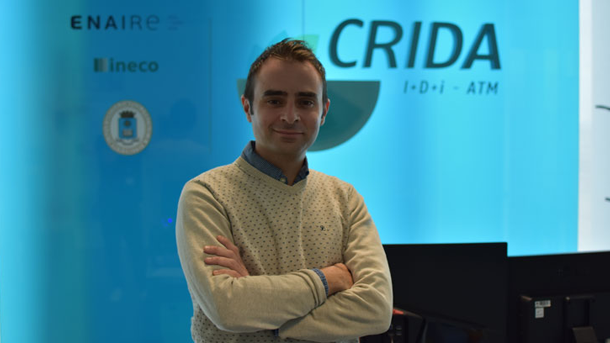 Christian Eduardo Verdonk Gallego, born in the town of Villanueva de la Serena (Badajoz) in Extremadura, holds a PhD in Aerospace Engineering and a Bachelor's in Aviation Engineering from the UPM. He works as an ATM R&D engineer at CRIDA A.I.E. (ATM RESEARCH, DEVELOPMENT AND INNOVATION CENTRE, A.I.E), a non-profit group set up by ENAIRE, which holds a 66% stake, the Polytechnic University of Madrid (UPM), with a 17% stake, and Ingeniería y Economía del Transporte, S.A. (INECO), with a 17% stake.

Christian is also a Visiting Fellow at Cranfield University, where he served as a Research Fellow in ATM from 2015 to 2019.

Christian coordinates ENAIRE/CRIDA's efforts in the PJ18.W2-4DSkyways project, part of Solution 53 (Prediction of Trajectories) within the SESAR programme. The 4Dskyways project provides an unbeatable framework for enhancing the maturity and visibility of research. The techniques developed are expected to increase prediction timelines, and thus anticipate potentially complex air traffic control situations in advance.

He also coordinates the FARO (saFety And Resilience guidelines for aviatiOn) project, dedicated to researching air traffic safety and resilience. FARO is an exploratory research project funded by SESAR JU, in which ENAIRE is involved as a member of the consortium coordinated by CRIDA.

The thesis analysed more than 45,000 flights in 2014 and 2015. This was made possible thanks in part to the ATM data extraction and transformation process that CRIDA researchers and engineers have been carrying out for more than 10 years. Now, this research is facing a new challenge, which is to mature fully within the SESAR programme. As a result, the technical and operational developments achieved in the thesis will continue to evolve within the European PJ18.W2-4DSkyways project.