At its meeting today, the Council of Ministers, at the suggestion of the Ministry of Transport, Mobility and the Urban Agenda (Mitma), authorized the tendering of a works contract to expand the Enaire Air Traffic Control Center in Madrid, with an estimated budget of 23.12 million euros (without VAT). The works are expected to last 24 months, with the remodeling completed in 2025.

This tender is part of Enaire's strategy to modernize the Madrid Control Center complex, which will, as a whole, involve an investment of around 100 million euros between works and state-of-the-art technological equipment.

A new building will be built with a 1,500 m2 air traffic control room, 50% more surface area than the current one, which will allow the next iFOCUCS control stations to be installed and enhance synergy with engineers and technicians.

The project includes the construction of a new building, to be located next to the current one in the Torrejón de Ardoz complex in Madrid, which will house a new 1,500 square-meter control room, 50% larger than the current one, which will allow for a new, more efficient layout of air traffic control positions, in response to traffic forecasts, together with the installation of new work positions as part of a cutting-edge technological upgrade process (Enaire's iFOCUCS project) and greater synergy with engineers, air navigation technicians and operations and management and supervision areas.

More than 1,000 company professionals are currently working at this location, together with Air Force personnel, the European ESSP and other service companies. Based on the growth in traffic and the activities and services set out in Enaire's 2025 Flight Plan, this number of workers is expected to increase in coming years.

This Enaire Control Center in Madrid, where its Central-Northern Region is based, manages 435,000 km2 of airspace in the northern half of the Iberian Peninsula, providing en-route and approach air traffic control services, as well as aerodrome control at nine airports: Adolfo Suárez Madrid-Barajas, Santiago-Rosalía de Castro, Asturias, Seve Ballesteros-Santander, Bilbao, Vitoria, San Sebastián, Logroño and Pamplona.

Communications, navigation and surveillance services are also provided for 19 airports - Cuatro Vientos, Vigo, A Coruña, Burgos, León, Salamanca, Huesca and Zaragoza, together with the previous ones - to support air traffic in all these facilities thanks to 96 air navigation facilities spread throughout the region. 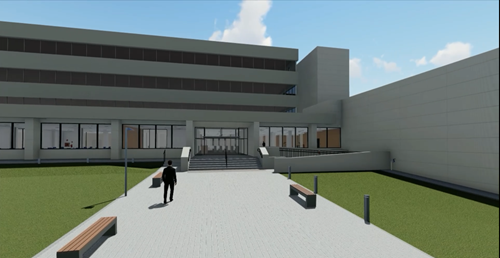 The tender approved today includes measures to improve energy efficiency through the use of renewable energies and geothermal, aerothermal and heat accumulation systems.

The IT equipment rooms, which dissipate a lot of heat, will have a redundant system of highly efficient coolers, in addition to a system consisting of aerothermal heat pumps and a geothermal system, each of them sized for half of the maximum design power.

The 220-KW geothermal pump will manage the majority of the annual energy, thus yielding significant savings with respect to the use of a 100% aerothermal system.

High-performance air handling units are also planned to be installed, which will include a regenerative heat wheel and humidity control.

Photovoltaic solar panels are also being installed in phases, which, together with those that will be installed on the roof of the adjoining building, will add up to a total of 3,100 panels and provide 1.8 MW.

This project is included in the strategic plan for Enaire, the 2025 Flight Plan, which includes the renovation and modernization of the building constructed in the 80s next to the Torrejón de Ardoz Air Base, and expand the number of buildings in the complex to three. The new facilities will be designed with safety parameters and improved energy optimization in mind, while maintaining the highest levels of quality, reliability and redundancy, in order to ensure the availability and continuity of the energy supplied to the air traffic management systems.

The construction of a third operational technical building for air control training and contingencies is under way. With 2,000 m2 per floor, it will house the power and air conditioning systems, equipment rooms, training rooms and air control simulators, and it will be available in 2023.

There will also be an uninterrupted surveillance center for services and supervision of the Enaire network (SYSRED H24) and its air traffic, with offices, meeting and break rooms, power and air conditioning area, configurable common spaces and a museum for visitors.