An ENAV delegation, led by the CEO Paolo Simioni, met in Tripoli the Libyan Transport Minister Muhammad Salem Al-Shahoubi and the President of the Libyan Civil Aviation Authority Mustafa Benammar, to plan the main activities to relaunch the Libyan civil aviation and support the establishment of direct connections with Italy and Europe. In fact, ENAV will support the Libyan aviation in the coming months by replacing the damaged equipment of the new control tower of the Mitiga international airport in Tripoli, built by ENAV two years ago and providing, high technology for the control towers of the Tripoli and Misurata airports and for the Tripoli Area Control Centre.
The meeting was organized thanks to the support of the Ministry of Foreign Affairs and International Cooperation and of the Italian Embassy in Tripoli managed by the Italian Ambassador in Libya Giuseppe Buccino Grimaldi.
CEO of ENAV Paolo Simioni stated: first, I would like to thank the Ministry of Foreign Affairs and International Cooperation with the structure in Rome and in Libya and  in particular the Italian Ambassador in Tripoli Giuseppe Buccino Grimaldi who gave us the support to reach this opportunity. Libya for ENAV represents a strategic Country. Almost all the connections between Europe and equatorial Africa pass through Libya and Italy. If Libyan airspace remains closed for the international air flow, the airline companies are consequently forced not to cross Italy either. Supporting them therefore means not only contributing to the growth of ENAV's commercial activities but also ensuring an air flow that relaunches connections with Europe and specially with Italy. We are proud to be involved in the stabilization process of the Country, also responding to the legitimate expectations of mobility of the Libyan people.
ENAV has been collaborating continuously with the Libyan authorities since 2011, also thanks to the Memorandum of Understanding signed in 2016, for the training of operational personnel, modernization of the air navigation infrastructures and aeronautical consultancy services.

In addition, in the last two years, ENAV has signed contracts with its Libyan counterpart for the modernization of infrastructures for air traffic management for an amount of approximately 14 million euros. These activities, currently underway, are part of a development process of the Libyan airspace necessary to guarantee direct connections with Europe. In particular, ENAV will provide and setup technological systems for the control towers of Tripoli and Misurata International Airport and systems for the new Tripoli Area Control Centre; it will also provide the flight inspections and calibration services for some air navigations and radio aids in the Tripoli and Misurata area. 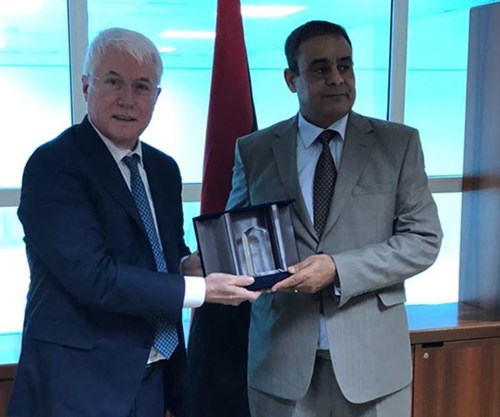