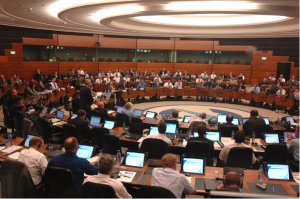 Despite the increasing sophistication of UAS, safety concerns mean that at present they are normally segregated from other airspace users. This inhibits their employment in a wide range of activities that are particularly well suited to their unique mix of capabilities such as flexibility, agility, long-endurance and low cost. EUROCONTROL is therefore providing the European lead on the air traffic management (ATM) aspects of UAS flight outside segregated airspace. The challenge of UAS integration is global, said Jean-Robert Cazarré, Director of Civil-Military Coordination at EUROCONTROL. It will not happen without the relevant national and international organizations, agencies and bodies all cooperating closely with each other, and EUROCONTROL has established just such synergies. In addition, we need to sustain a strong partnership with industry, operators and airspace users, particularly General Aviation, to ensure that all concerns are properly addressed. Over 200 of EUROCONTROLs stakeholder community were briefed about the programme and asked for their feedback at a workshop held on 7 and 8 May 2008 in Brussels. During the Workshop, Holger Matthiesen, EUROCONTROL UAS Activity Manager, elaborated on the two-stream approach being taken by EUROCONTROL. The first will address the integration of UAS in the short to medium term - up to 2020 - within the framework of the existing ATM regulatory, operational and technical environment. However, future ATM in Europe is due to undergo significant change in the form of SESAR (Single European Sky ATM Research), which is intended to revolutionise the way air traffic is managed in Europe after 2020. The second stream of the EUROCONTROL UAS work programme will therefore aim to dovetail with SESAR, to ensure the full integration of UAS into the future ATM system envisaged by the Single European Sky initiative. The Workshop sought to address the many aspects related to UAS integration, but in discussion returned regularly to the requirement for an effective sense-and-avoid system and the need to ensure adequate radio spectrum for the additional avionics associated with UAS flight. As a joint civil-military organisation, EUROCONTROL is well-placed to make certain that the requirements of all UAS operators are considered, Mr Cazarré added. Indeed, in the context of ATM, there should be no differentiation in the standards that civil and military UAS will need to meet to satisfy national and European regulators. The airspace is the same for all, and so too is the imperative of integrating safely with other users.