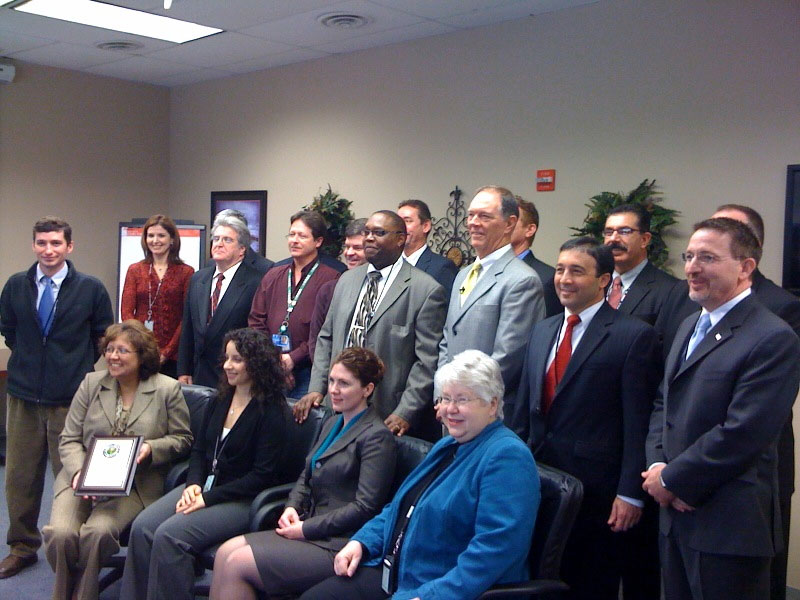 Safety is our highest priority at the U.S. Department of Transportation, and this new satellite-based technology will help the FAA improve the safety of flights over the Gulf even as air traffic increases, said U.S. Transportation Secretary Ray LaHood. This is a significant, early step toward NextGen, Administrator Babbitt said in a press conference at the Houston Air Route Traffic Control Center. Were delivering on time, a system thats not only more accurate than radar but comes with significant safety and efficiency benefits. This will save time and money for aircraft operators and passengers and reduce our carbon footprint. ADS-B, which is one of the technologies at the heart of the transformation to NextGen, brings air traffic control to the Gulf of Mexico, an area that has not had the benefit of radar coverage. Before ADS-B, controllers had to rely on an aircrafts estimated or reported not actual position. Individual helicopters flying under Instrument Flight Rule conditions at low altitudes to and from oil platforms were isolated within 20x20 mile boxes in order to remain safely separated from other helicopters. The complex, manual nature of these operations severely reduced capacity and efficiency for the 5,000 to 9,000 daily helicopter operations in the Gulf of Mexico. Aircraft equipped with ADS-B in the region will now know where they are in relation to bad weather and receive flight information including Notice to Airmen and Temporary Flight Restrictions. Prior to ADS-B, commercial aircraft flying at high altitudes were kept as much as 120 miles apart to ensure safety. Controllers are now able to safely reduce the separation between ADS-B equipped aircraft to five nautical miles, significantly improving capacity and efficiency. The new technology will also allow the FAA to provide new, more direct routes over the Gulf of Mexico, improving the efficiency of aircraft operations while using less fuel. The FAA was able to install ground stations on oil platforms as part of an agreement with the Helicopter Association International, oil and natural gas companies and helicopter operators. A network of ground stations was deployed on oil platforms and the surrounding shoreline, bringing satellite-based surveillance to an area with almost as much daily air traffic as the northeast corridor. The Gulf of Mexico is the second key site where ADS-B is being used by controllers to separate aircraft. The new technology is also being used by controllers in Louisville, KY, chosen in part because UPS voluntarily outfitted much of its fleet with ADS-B avionics. Four ground stations give controllers at the Louisville International Airport and the Louisville Terminal Radar Approach Control facility an ADS-B coverage area extending 60 nautical miles around the airport up to 10,000 feet. Controllers in Philadelphia will begin using ADS-B in February and the system will become operational in Juneau in April. ADS-B is expected to be available nationwide by 2013. The FAA first established an ADS-B prototype in Alaska, outfitting numerous general aviation aircraft with ADS-B avionics. The improved situational awareness for pilots and extended coverage for controllers resulted in a 47 percent drop in the fatal accident rate for equipped aircraft. In South Florida, the installation of eleven ground stations now gives pilots in equipped aircraft free traffic and weather information. Controllers will soon begin using ADS-B in that region to separate aircraft.
your benefits?