In daily operations, pilots are benefiting from direct routings – known as 'tactical directs' – offered flexibly by air traffic controllers (ATCOs) on the frequency during the actual flight. With these tactical directs, ATCOs are eliminating a source of inefficiency that occurs if individual flight plans do not use the most efficient routing. Overall, in 2016 these tactical directs resulted in an average reduction of 15 kilometres in the distance flown per flight when compared with the routing originally planned, with the average distance flown declining from 528 kilometres to 513 kilometres per flight. The benefit for airspace users can be expressed in the reduction of fuel burned of 278,000 tons, or in monetary terms EUR 352 million. Beside this, air traffic controllers reduced the environmental footprint of aviation by 938,000 tons of CO2.

“We are glad to provide flexible services to the airspace users,” said Michiel van Dorst, CEO LVNL and FABEC CEO Champion Operations. “The example of tactical directs demonstrates that close collaboration between all partners and at all levels is key to an efficient aviation industry – for the sake of passengers,  the European economy and the environment.”

Tactical directs are one of the means of improving the service quality of air navigation services. To manage the high complexity and congestion within their airspace, FABEC air navigation service providers have developed several flexible tools to improve operations to the greatest extent possible, such as conditional routes or seasonal procedures improving flight profiles. 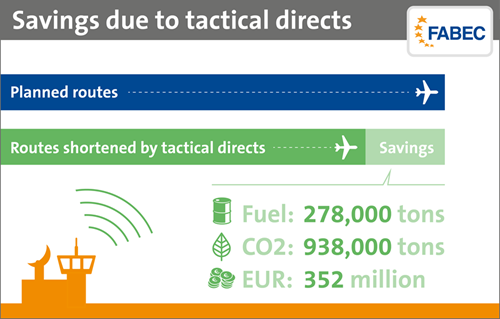