In 2017, air traffic controllers guided 5.99 million flights (+3.4 percent) safely and punctually through FABEC airspace. This was an all-time high for traffic volume, topping the historical peak reached last year. The number of arrivals at the 83 airports in the FABEC area grew by 1.90 percent compared with 2016. The main cause of this development was the overarching positive trend on the aviation market, which continued for the fourth consecutive year.

Despite this overall trend, there are significant variations between control centres, and especially, individual sectors. Traffic demand has become volatile and the bandwidth of monthly growth for FABEC ANSPs varied between -0.9 and +7.7 percent (annual average +3.4 %). Individual growth rates at the control centre or sector level can be significantly higher. In addition, some sectors – especially in the core area – are becoming saturated, meaning they are no longer able to cope with additional unpredicted demand. Analyses show that volatility of traffic has become a complex and multidimensional issue severely impacting air traffic management. The underlying causes range from geopolitical conflicts, the impact of climate change and new and diverging business models of airspace users up to tactical aspects, such as individual flight planning or unexpected and short-term changes of sector loads. 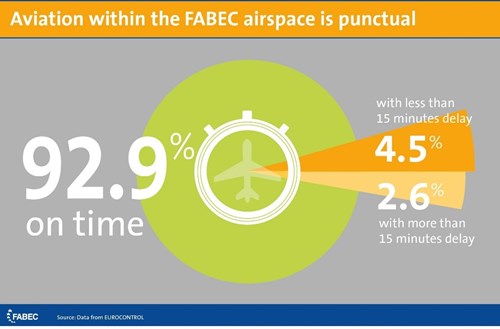 In 2017, 92.9 percent of all flights (2016: 94.1 percent) experienced no delays caused by air traffic control as measured by ATFM en-route delays, the indicator used to assess the contribution to delay attributable to air navigation services within the aviation chain. In addition, 97.4 percent arrived at their destination airports within 15 minutes of the scheduled time. Consequently, the overall amount of delay minutes caused by traffic flow measures increased by 11.5 percent (2017: 69 seconds per flight; 2016: 64 seconds per flight). FABEC missed the target of 25 seconds per flight.

The main reasons for ATC delays are shortages in capacity (42.3 percent) and staffing (15.7 percent) – both mainly due to a mismatch of unpredicted traffic versus long-term staff and capacity planning as determined in the FABEC Performance Plan. Beside this, the impact of climate change is increasing, and becoming more visible for passenger in terms of thunderstorms or closures of airports due to snow on the runways. In 2017, 22.9 percent of all delays were caused by adverse weather. The impact of industrial action decreased substantially, causing 10 percent of the overall delay.