In the first nine months of 2015, 240 new direct routes (DCTs) were implemented across FABEC airspace. A strong increase in the use of DCTs has been observed corresponding to the implementation of new DCTs introduced in January, April and June. These implementations are part of the FABEC Free Route Airspace Project. Overall, FABEC air navigation service providers have set up a network of 1,365 direct routings since 2010. The FABEC Free Route Airspace Project is a major contribution to complying with the EU’s Pilot Common Project Regulation No. 716/2014 that aims to, among other things, deploy a direct route network by 2018.

Several of these direct routes also connect with other direct routes in neighbouring Functional Airspace Blocks (FABs), namely the UK-Ireland FAB, the North European FAB, FAB Central Europe and Blue Med FAB, extending the connectivity of the European direct route network. At a regional level, the network of cross-border routes available in Belgium, Luxembourg, Germany and the Netherlands deployed by Eurocontrol’s Maastricht UAC and DFS continues to make significant headway and now boasts in excess of 800 direct routes, more than half of which operate on a 24/7 basis. In French and Swiss airspaces, DSNA and skyguide have deployed a total of 145 new DCTs, mainly at night.

With regard to the direct routings implemented in 2015, current forecasting suggests potential annual reductions in flying distances of approximately 510,000 nautical miles, saving airlines 3,000 tonnes of fuel, which will in turn lead to a reduction in CO2 emissions on the order of 10,200 tonnes, and EUR 4.8 million. An initial analysis conducted by the Network Manager has shown increased use of the new routes. Initiatives to promote greater use of direct routes by the airlines are in place, with the involvement of airline flight planning software providers, the Network Manager and the ANSPs to ensure optimum route selection and maximum benefits for aircraft operators. 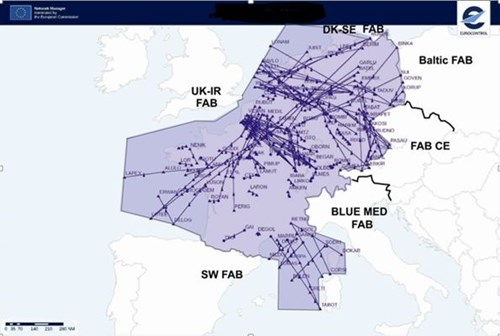 DCTs implemented in FABEC airspace from January to September 2015