Small in size, the Swiss airspace is particularly dense and complex. All improvements of its operability benefit the FABEC airspace users. In the framework of the FABEC Free Route Airspace in the core area of Europe, the Swiss airspace navigation provider Skyguide introduced 13 additional Direct Routes (DCTs) in November 2017. From now on, all ATS routes are replaced by DCTs during the night. This makes the FABEC network more attractive, since airlines will save fuel and flight time when flying in the Swiss Area of Responsibility.

With these additional DCTs – 50 had already been created in March 2017 -, Skyguide complies with European and PCP requirements and contributes to the overall environmental performance targets in FABEC. 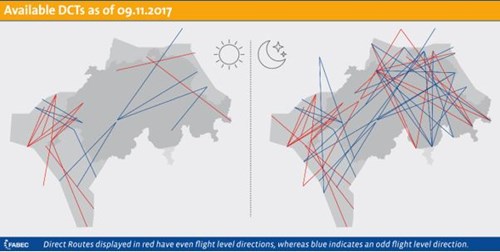 A further improvement of the network which will allow airlines to fly even shorter routes through Swiss and adjacent airspaces will be undertaken in 2018. In the development of these improvements, Skyguide will build on the common FABEC approach towards FRA and the fruitful exchange of lessons learned from those already operating a FRA.