Airspace users planning to fly in the upper airspace between Belgium, Luxembourg, the Netherlands, Germany, Denmark and Sweden can now do so irrespective of airspace boundaries. This allows for optimised routings, fuel savings and a reduction in greenhouse gas emissions.

The general objective of free route airspace is to allow airspace users to plan their routes more closely to their desired flight profiles in comparison with the currently published ATS routes and direct routes. This results in better cost-efficiency, and reduces the impact on the environment by decreasing fuel burn and greenhouse gas emissions. Simultaneously, it allows the highest safety and capacity levels to be maintained or improved.

Free route airspace was first implemented in the DK-SE FAB in 2011, and was then linked in May 2017 to the North European Functional Airspace Block (NEFAB – Norway, Finland, Estonia, Latvia) free route airspace. Meanwhile, FABEC members EUROCONTROL MUAC and DFS Deutsche Flugsicherung (Germany) started implementing free route airspace in their respective areas of responsibility in 2017 and 2018 respectively. 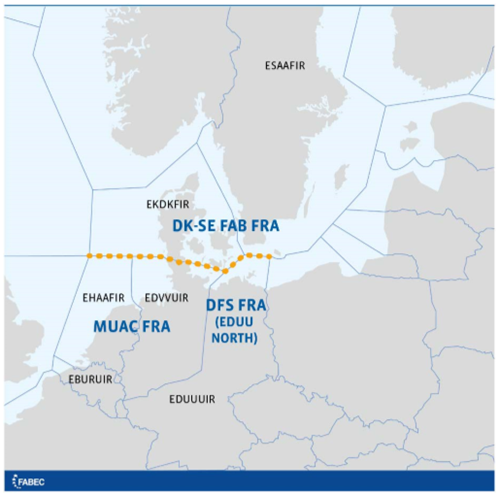