“Our new voice communications system is an outstanding system built to meet the future challenges of safe, shared and more efficient European airspace. It will allow new strategic ATM developments, such as dynamic airspace sectorisation. MUAC and its FABEC partners have always strived to increase their performance through innovation, and to anticipate future needs. The N-VCS – combined with other leading-edge tools in our control room – will fully contribute to meeting this objective, particularly now, when we are seeing unprecedented air traffic growth and increasing airspace complexity. Furthermore, in today’s world of increasingly frequent cyberattacks, it is essential for us to work with the latest and safest systems available”, said John Santurbano, the Director of MUAC.

“In France, the N-VCS will replace, in the near future, the main and back-up VCS currently in use in the five French area control centres (ACCs). The backup N-VCS will also soon replace the current radio back-up operating at Paris-Charles de Gaulle. N-VCS deployment projects - first in Charles De Gaulle and Brest ACC - are underway. The Bordeaux ACC project has been launched in 2017”, added Maurice Georges, DSNA’s CEO.

The N-VCS is not simply about replacing an obsolete system, it is above all a unique tool which allows more dynamic airspace management between countries or sectors operating with voice communications systems of the same generation. This means, for example, that one air navigation service provider could handle aircraft crossing another partner’s airspace, possibly at night when traffic levels are low. This feature has the potential to improve safety further as well as achieving greater synergies between ATC centres.

The new technology offers immediate benefits for the MUAC air traffic controllers. For example, it supports seamless re-sectorisation. Whereas the controllers used to coordinate the handover of roles and frequencies orally, this is now fully automated – the controller simply needs to press a switch and all frequencies are selected in the correct sector. This means that coordination is carried out directly via the system. Furthermore, through automated multi-channel radio back-up functions, the N-VCS provides increased reliability, safety and performance. Finally, combined with the new radio direction finder system, operational at MUAC since February 2017, the N-VCS allows more precise conflict detection, enhancing safety even further. 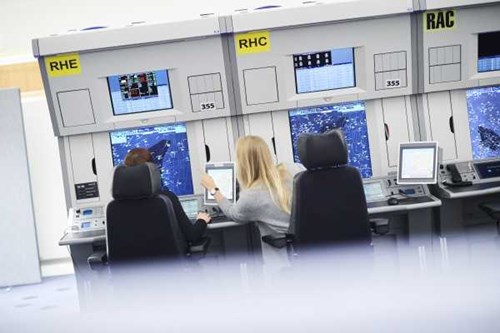 Rather than a traditional landline connection, which transmits voice over a circuit‑switched network, the N-VCS uses a voice over Internet Protocol (VoIP), whereby the voice signal is digitised and divided into IP data packages, which travel over two separate networks, offering greater security and better coverage.

To ensure safety, stability and controller comfort, the system underwent several months of extensive testing and ultimately day-and-night trials. In addition, the legacy voice communication system will run in parallel with the new system for a few more months until the latter has proven that it is fully stable.

The N-VCS project is co-funded by the European Commission in an amount of €3.8 million through the Connecting Europe Facility (CEF), which supports the development of trans-European networks in transport, energy and digital services.