Over the past year the service quality provided by the seven FABEC air navigation service providers settled down on a high level. While the average en-route delay was 0.47 minutes (28.6 seconds) per flight in 2013, it slightly deteriorated to 0.56 minutes (33.6 seconds) in 2014. 2013 was an outstanding year and in 2014 the FABEC ANSPs achieved the second best result ever recorded. First analyses show that the reasons for this trend are mainly local and related to local shortages of ATC capacity, industrial action and adverse weather. With regard to the FABEC Performance Plan, the objective of 0.5 minutes (30 seconds) of average ATFM delay/flight was slightly exceeded by 0.06 minutes/flight (3.6 seconds). 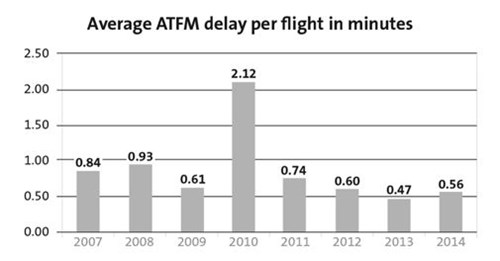 At the same time, traffic in the FABEC area increased by 1.5 per cent, from 5,431,865 flights in 2013 to 5,512,235 flights in 2014. With regard to traffic trends it can be noted that almost all centres controlled more traffic than the year before. Only three centres (Munich, Marseille and Langen) recorded slightly less traffic when compared with 2013. Although this is an encouraging result, the 2014 demand from airspace users was still below the demand seen in 2007. In addition, at the end of the first reference period, FABEC traffic was 11.2 per cent below the traffic forecast used as the basis for the 2012-2014 FABEC Performance Plan. Just like punctuality, this development should be seen as an overarching trend while local developments have varied considerably from one control centre to the other. At the end of the first reference period (2012-2014) only three centres (Reims, Brest and Maastricht) recorded more traffic than forecast while all others recorded less.