Safe and punctual – volatile growth of air traffic
In 2016, the service quality in terms of safety, capacity/punctuality and flight efficiency remained at a high level. This is in a nutshell the message provided by the seven FABEC air navigation service providers ANA (Luxembourg), Belgocontrol (Belgium), DFS (Germany), DSNA (France), LVNL (Netherlands), MUAC (EUROCONTROL), and skyguide (Switzerland) in their annual performance report 2016. The report furthermore provides factual indications – like the growing traffic volatility accompanied with unexpected shifts of traffic flows – that a common effort is needed to keep the good level of service quality provided over the last decade. 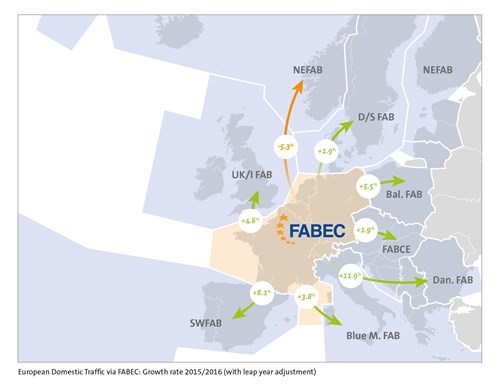 fely and punctually through FABEC airspace. This was an all-time high, topping the historical peak reached in 2007. Despite this trend, there were significant variations between control centres and their individual sectors. The bandwidth of growth for FABEC ANSPs varied between 0.1 and 4.9 percent. Individual growth rates at the control centre or sector level were significantly higher in some cases. With regard to the traffic development at European airports, Amsterdam Schiphol Airport and Paris Charles de Gaulle overtook London Heathrow Airport and became the busiest airports in Europe. Overall, the number of arrivals at FABEC airports grew by 2.0 percent.

Excellent safety record
In 2016, there were once again no accidents of civil aircraft caused by air navigation services in FABEC airspace. The level of safety was consistently high as proven by data on separation minima infringements and runway incursions. The number of separation minima infringements with ATM contribution declined from 1.023 (2015) to 970 (2016). Runway incursions with ATM contribution dropped from 143 (2015) to 116 (2016). Despite this positive trend safety is not a given. To stay safe continuous investments in the proficiency of staff, in advanced technologies and in state-of-the-art safety management systems are mandatory.

Passengers are arriving on time
94.1 percent of all flights conducted in 2016 were punctual meaning that they experienced no ATFM en-route delays. 97.5 percent were within 15 minutes of the scheduled time. Nevertheless, the average delay due to en-route ATFM measures increased from 42 seconds to 64 seconds per flight. The main reasons for delays were a lack of capacity at the control centres of Brest and Maastricht, adverse weather in the airspace controlled by Maastricht and Karlsruhe, industrial action in France and staff shortages in the control centres of Brussels, Langen and Karlsruhe. The delay for the 15 biggest airports in FABEC has dropped to 2.4 seconds per flight. This is a value that allows for virtually no more improvements. Punctuality scores are close to 100 percent. Today, if arrival flow measures have to be taken they are usually caused by external factors such as weather, local (noise) regulations or social action within the aviation chain.

Despite the fact that punctuality improved for arrivals and remained at a high level for en-route, the ambitious targets set by the European Commission have only been partially reached. With regard to en-route ATFM delay, the target of 29.4 seconds delay per flight could not be met (2016: 64.2 seconds per flight). On a positive note, all FABEC ANSPs, apart from the extraordinary case of Brussels Airport impacted by the terrorist attack, were able to achieve their airport targets.

Environmental impact: continuous improvement
In 2016, the average en-route distance per flight in FABEC airspace was 513 km, 9 km longer (1.7 percent) than the average direct route. Taking into account that there will always be some deviations due to military activities, weather, aircraft separation requirements and require

ments from airspace operators to deviate from the direct route due to wind or other parameters, this is a good value which allows for only marginal improvements in the future. Flying remains the safest, most punctual and most direct mode of transport.

The report is available here.