“This project created an iconic, modern tower that provides critical safety benefits for the tens of millions of people who pass through this airport each year,” said U.S. Transportation Secretary Anthony Foxx. “In addition, it put many Bay Area residents to work in well-paying jobs – more than 2,000 workers contributed more than 500,000 labor hours to this project.”

“Completing this key infrastructure investment required a true collaboration between the FAA and SFO,” said FAA Administrator Michael Huerta. “The end product reflects not only our passion for safety, but also our shared belief that investment and environmental responsibility are intertwined. This project is a shining example of our efforts to minimize our environmental footprint.”

“San Francisco is a City of Innovation, and the new airport traffic control tower at SFO reflects this spirit,” said San Francisco Mayor Ed Lee. “Seismically sound, environmentally sustainable, and iconic in design, this new facility is truly a beacon for our gateway to the world.”

“This new airport traffic control tower stands as a tribute to our partnership with the FAA,” said Airport Director Ivar C. Satero. “This project represents the first-ever collaboration of its kind between an airport and the FAA to construct a new tower. The result is a masterpiece, replete with cutting-edge safety engineering, advanced technology, and the visual dynamism to represent SFO for decades to come. I truly appreciate the vision, dedication, and teamwork that made this exceptional facility possible.”

The new tower was necessary because the old tower did not meet current seismic standards, and retrofitting the 32 year-old building was not feasible. The new tower is designed to withstand a magnitude 8.0 earthquake.

Located between Terminals 1 and 2, the tower features a 147 foot-tall ribbon of glass running down the middle of the structure. The glass reflects sunlight during the day and is illuminated by interior lighting at night.

The project also includes a three-story, 44,000 square-foot base building, which houses administrative offices, computer equipment, a backup generator, and secure corridors that allow passengers to transit between terminals without affording access to the tower.

New air traffic control equipment in the controller work area includes a state-of-the-art ground radar system and touch-screen displays for weather and airfield status information. By the end of the year, the ground radar will link to Runway Status Lights, which are similar to stop lights that tell pilots when it is unsafe to enter a runway or to take off.

A host of green environmental features earned the project LEED Gold status from the U.S. Green Building Council. These include solar panels installed on a nearby building roof; natural daylight in offices and the public lobby; a roof garden and reflective roofing, which reduce heat gain from the roof; low-flow plumbing fixtures; recycled building materials; an electric vehicle charging station; and energy efficient mechanical and electrical equipment.

The FAA’s share of the project cost was about $82 million. SFO’s share was about $69 million for integrating the tower into the existing airport complex, which included the materials for the building facade and the exterior LED lighting array.

Construction on the new tower began in June 2012. The FAA will start using the facility on October 15, 2016. 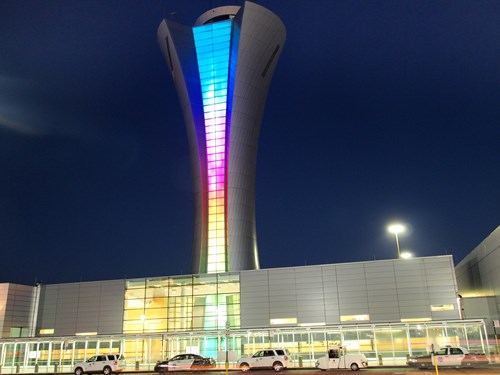