One of the key themes at this year’s World Air Traffic Management (ATM) Congress is how the industry is coping with Europe’s ever-growing ATM capacity shortages and related airspace inefficiencies, such as lack of a seamless European sky. According to the latest Eurocontrol data, record delays and cancellations affected some 334 million travellers (+26%) last year, resulting in a €17.6 bn cost to the EU economy -- a 28% increase compared to 2017.1 A new study2 also found that ATC strikes, technical failures and related operational inefficiencies have led to one million tonnes of avoidable CO2 emissions since 2014 -- on top of the additional emissions generated by not implementing EU airspace reform.

To alleviate existing bottlenecks and achieve short-term improvements on behalf of passengers and the environment, A4E airline COOs together with leaders from CANSO, EBAA, the ETC3 and Eurocontrol have signed the “Efficient Airspace” Declaration, agreeing a set of key principles and actions which could improve the situation. Given the impact such inefficiencies are having on inbound tourism to the EU -- threatening the reputation of Europe as a reliable tourist destination, the ETC joined the initiative at a signing at the A4E Aviation Summit on 6 March.

Several of the measures agreed in the Declaration have already been addressed and will be put into place by the start of the 2019 summer schedule, specifically:
✓ Eurocontrol Network Manager to implement a coordinated approach for handling network operations in summer 2019, addressing restrictions, weather, civil/military cooperation and unplanned events.
✓ Based on airline input, Eurocontrol Network Manager to implement, in cooperation with CANSO Member ANSPs, enhanced network measures to balance air traffic capacity with demand -- and accomplish the first steps towards a seamless European sky before summer 2019.

A4E’s Managing Director, Thomas Reynaert, addressed participants at the World ATM Congress during his panel, “The Big Crunch – Hard Talk on ATM Capacity” today: “The ‘Efficient Airspace’ Declaration has succeeded in reinvigorating enthusiasm for the vision of a seamless European sky of the future -- as part of the SES initiative -- and these past few months have shown that a combined effort among operational and political stakeholders is essential in order for real progress to occur”.

“The results from the European Commission’s Airspace Architecture Study underline the need to reconfigure and reform European airspace as well as create a legal and financial framework that rewards early movers. A4E welcomes both of these recommendations and we look forward to continuing the good work initiated through our Declaration to improve passengers’ travel experience and reduce the burden on our environment. In the meantime, we continue to set the standard in calling on national governments and the EU to make EU airspace reform a top political priority”, Reynaert added.

“CANSO and its Members are working closely with the airspace users, European Commission, States, and other stakeholders to improve the resilience of the ATM network and achieve a truly seamless European sky. We look forward to continuing this collaborative approach to championing efficiency in Europe”, said Tanja Grobotek – CANSO Director Europe Affairs.

“An efficient airspace is instrumental to European citizens, operators and European communities alike – and we will continue to tackle the current issues that are at stake and encourage Member States to aid in implementing solutions at the local level”, said Robert Baltus, Chief Operating Officer, EBAA. 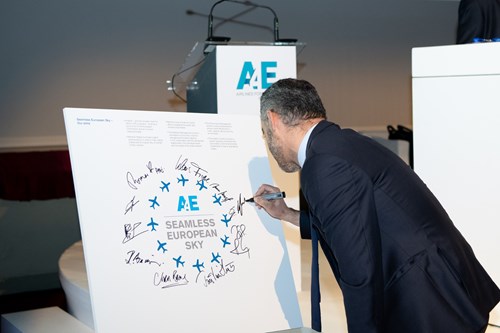