Monthly figures for July show the number of flights through UK airspace have fallen for the first time since the year-long downturn in the aviation industry following September 11, 2001. 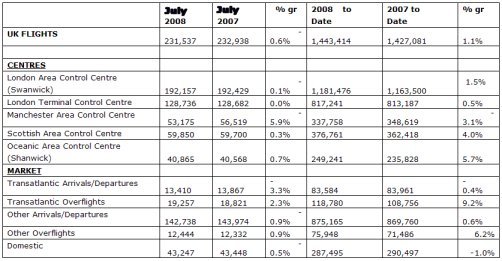 The drop of 0.6 per cent compared to July last year comes as figures for all NATS centres showed negative or neutral results. Ian Hall, Director of Operations, said: The aviation industry has always been a barometer of the wider economy so it should not come as any surprise to see a slight slowdown, particularly since the airlines have signalled some cutbacks to services. This is the peak summer month and it is important to note that we are still handling record numbers of flights in key parts of our operation. Since September 2002, monthly statistics have generally shown an increase on the same month the previous year, which means traffic is still near record levels. Both Heathrow and Gatwick broke their monthly records by handling 41,941 and 26,077 respectively as did London Terminal Control, Scottish Area Control and Oceanic Area Control centres. Transatlantic departures and arrivals decreased by 3.3 per cent, while transatlantic overflights grew by 2.3 per cent, compared to 11.1 per cent last month. Traffic at airports at which NATS provides a service also fell overall by 0.6 per cent despite strongest growth at airfields including London City (10.8 per cent), Belfast International (8.2 per cent) and Bristol (5.6 per cent).
your benefits?