The Solar Impulse HB-SIA, with André Borschberg at its controls, successfully landed this morning at 09:00, to the cheers of a crowd of supporters who came to celebrate this great milestone. 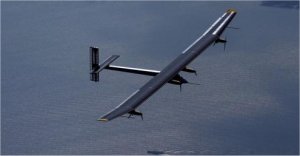 For more than 26 hours, André Borschberg expertly piloted the aircraft with its 64 meter wingspan. The plane was up in the air yesterday for the whole day, then through the entire night, flying solely on solar energy. This flight is the longest and highest in the history of solar aviation! "I've been a pilot for 40 years now, but this flight has been the most incredible one of my flying career. Just sitting there and watching the battery charge level rise and rise thanks to the sun And then that suspense, not knowing whether we were going to manage to stay up in the air the whole night. And finally the joy of seeing the sun rise and feeling the energy beginning to circulate in the solar panels again! These were the emotional words of André Borschberg, CEO and co-founder of the Solar Impulse project, spoken on leaving the cockpit. I have just flown more than 26 hours without using a drop of fuel and without causing any pollution! Bravo André! You have just proved that what I have been dreaming about for the last 11 years, is possible", cried out Bertrand Piccard, initiator and President of the project, the moment the Solar Impulse HB-SIA touched down. He went on to say that This is a crucial step forward, it gives full credibility to the speeches we hold since years about renewable energies and CleanTechs and allows us now to get closer to the perpetual flight without using a drop of fuel! He then ran over to hug his partner, both men full of tears. Such success would not have been possible without all the hard work put in by an exceptional team", said Claude Nicollier, head of the Solar Impulse test flight programme. The success also belongs to Solvay, Omega, the Deutsche Bank and all our partners without whom this demonstration of the potential of renewable energy and new technologies would not have been possible", added the two Solar Impulse founders in chorus. Flight report Pilot: André Borschberg, CEO and Co-founder Take-off time: 07/07/2010 - 06h51 Landing time: 08/07/2010 - 09:00 Flight duration: 26 hours 09 min Maximum speed: 68 knots (ground speed) Average speed: 23 knots Maximum altitude: 8564 m (above sea-level) The success of this first night flight by a solar-powered plane is crucial for the further course of the Solar Impulse project. Now that the HB-SIAs ability to remain flying at night using solar energy stored during the day has been proved, we can start pushing the human and technological limits further. The next important milestones for Solar Impulse will be the crossing the Atlantic and the around the world flight, using the second prototype which goes into construction this summer.
your benefits?