The successful and already five decades lasting partnership between the Vienna-based high-tech company Frequentis and the Austrian air navigation service provider (ANSP) Austro Control will be continued with the renewal of the Austro Control's Internetbriefing System Service.

The Austro Control Internetbriefing System Service enables pilots to comprehensively prepare themselves for flights and submit flight plans via an internet platform, regardless of their current location. Austro Control placed an order with Frequentis concerning the delivery of the new system service. This new system service is based on the key features of the European AIS Database (EAD) and is closely connected to the EAD, which has also been implemented and is operated by Frequentis on behalf of EUROCONTROL.

The Austrian ANSP obtains an integrated system service, which enables its customers to plan a flight, coordinate an inner-European flight regarding air traffic (Central Flow Management) and to complete the necessary pilot pre-flight briefing including the MET briefing, either directly at the airport or via internet. Just like the EAD, the integrated Frequentis Internetbriefing System Service is based on the highest EUROCONTROL quality standards and certainly supports the ICAO (International Civil Aviation Organization) flight plan standard FPL 2012, which became effective on a global scale in November 2012. Hence, the investment made is future-proof.

The contract for renewing the Internetbriefing System Service, based on the EUROCONTROL's EAD system and service, was signed in January 2013. The collaborative approach allows an optimal combination of Austro Control's competences regarding METEO with those of Frequentis regarding the worldwide biggest Aeronautical Information Management Database (EAD), so as to make this joint know-how available to Austro Control customers. With the future solution for integrated internet briefing, Austro Control can implement a cost-efficient AIM (Aeronautical Information Management) business model and continue supporting the already started transition from a singular AIS (Aeronautical Information System) to an integrated AIM. The system start-up is expected for the end of 2014.

Austro Control and Frequentis continue their long-lasting partnership with the current order. The following are just some highlights from the cooperation between Austro Control and Frequentis: the refurbishment of the area control centre (ACC) located at Schnirchgasse, Vienna, at the end of the 1990s, the networking of the Vienna air traffic control centre and the individual centres and radio locations of the Austrian federal states as well as the innovative communication solution for the new tower located in Vienna-Schwechat (in operation since mid-October 2005). Since 2012, the four Austro Control centres Klagenfurt, Innsbruck, Salzburg and the Vienna air traffic control centre are also equipped with the Frequentis recording solution 'DIVOS 3 log'. 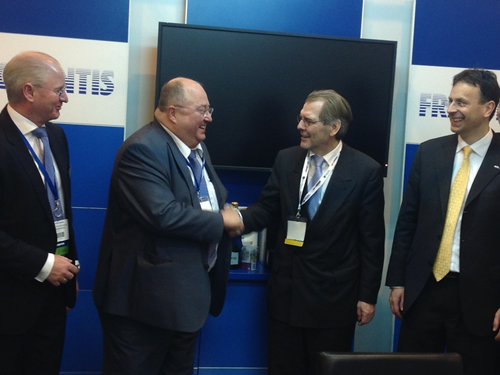