Air Traffic Control the Netherlands (LVNL) selected Frequentis electronic flight strips as part of its tower system modernisation program that is being deployed in accordance with the Pilot Common Project (PCP) regulations. Two towers at Amsterdam Schiphol airport have now been equipped with Frequentis smartSTRIPS.

Schiphol is Europe’s busiest airport and the world’s ninth busiest (2017), comprising of six runways. With a current maximum of nine controllers in the main tower and two in the west tower, three air traffic controllers, four ground controllers and four air traffic control assistants have the challenging task of coordinating 500,000 flight movements per year.  For this reason, the configuration of the solution was challenging, and five validation exercises took place to ensure the system was continuously customised to match the complex workflow of the Schiphol controllers.

“We set an ambitious time schedule to complete this project before the 2019 summer period and the Frequentis and LVNL teams worked hard to ensure it was realised. This included ensuring all controllers were trained and ready for the go-live. Throughout the project implementation, controllers gave positive feedback about smartSTRIPS and the way it could be adapted to efficiently support their operational workflow, combining fit-for-purpose usability with electronic data connection.”, says Marcel Bakker, LVNL General Manager Systems & Infrastructure.

LVNL’s tower system modernisation project was launched to upgrade and further digitalise the towers and to ensure the capability of ATM systems to meet market demands for safety, punctuality and processing capacity. The central tower and the west tower are both now successfully operating smartSTRIPS.

“The initial part of this modernisation program has been a great success. It is great to hear such positive feedback and see the change this will make to the controller workload and efficiency at such a busy airport. We look forward to completing the next projects in this program and supporting LVNL in their goal for safe, efficient and PCP-compliant air traffic management.”, says Hannu Juurakko, Frequentis Vice President ATM Civil. 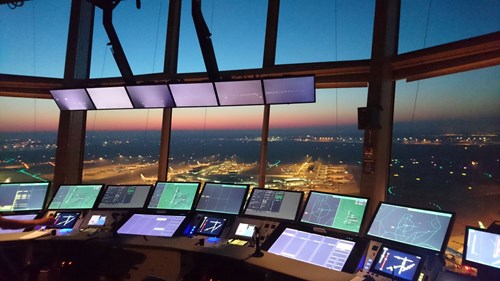