“As we were introducing a new technology, it was important to be able to continually customise and modify the platform. The ability to modify protocols and behaviours as traffic patterns and movement rates change is invaluable. Electronic flight strips have made considerable silent coordination between controllers possible, and the ability to customise the platform has increased the scope for this to occur. When controllers understand the tools and behaviours, they can adapt them directly to managing workload and usability according to operational experience. This gives users system ownership and makes the technology quite dynamic rather than static”, says Mike O’Neill from the Hong Kong Air Traffic Controllers’ Associations, praising the Frequentis solution.

“Receiving this award is an honour for Frequentis. Having been an air traffic controller in my previous job as well, I really know what challenges they have to cope with. By introducing automation features like digital departure clearance or silent coordination, our system makes their daily work much easier”, says Thomas Fränzl, New Business Development Manager for ATM Automation at Frequentis, proudly. 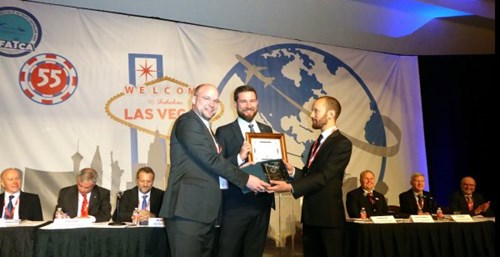