The highly anticipated Chinese aviation hub, Beijing Daxing International, was officially opened on September 25th in advance of the 70th anniversary of founding the People’s Republic of China. The Frequentis networked voice solution has been successfully installed, integrating voice communication for the entire airport, which will have capacity for over 100 million passengers. The new mega airport will divert air traffic away from the city at the existing Beijing airport, improving logistics and reducing congestion.

The Civil Aviation Administration of China (CAAC) selected the state-of-the-art voice communication solution and combined emergency system from Frequentis in 2017 to support the planned mega-airport and the teams on both sides have been supporting the rigorous testing and subsequent installation of the system for over 12 months. Five of seven major ATC centers in China were already equipped with Frequentis technology, making it the logical choice for Daxing International. The Frequentis voice solution includes the main and back up VCS for two airport towers at the new airport, and the new and existing Terminal Maneuvering Area’s (TMAs).

“We want to congratulate CAAC and ATMB for the successful opening of this new mega-airport. Our close working relationship with CAAC, built over the last 20 years, allowed us to develop an optimised overall solution to support the creation of a new international aviation hub in China. The voice solution for the new Beijing International Airport is highly innovative and has great future potential, which will support the region’s continued air traffic growth. This has been an extremely challenging project, pushing the boundaries of technology.” says Hannu Juurakko, Vice President ATM Civil, Frequentis.

The new mega-airport, constructed 42 miles south of the Chinese capital, will be the largest airport in the world and vastly increase the passenger capacity of Beijing’s aviation system. CAAC is striving to combat efficiency without compromising on safety – the high-quality voice communication solution from Frequentis is essential, ensuring the high performance and superior functionality required of an international aviation hub. It has initially launched with six runways and capacity for 45 million passengers per year, taking the strain off the current infrastructure, before further expansion increases this to well above 100 million passenger capacity.

Due to the project’s significant size, the government created a working group to plan and initiate the construction, gaining support from the Prime Minister and many other high-level officials, thanks to its importance for the country. The project was also pressured by a strict time schedule to open as part of the official 70th anniversary celebrations for the founding of the People’s Republic of China.

Additionally, Frequentis AG has been contracted to replace the current main and backup voice communications systems at the existing Beijing area control (ACC) and integrate it into the communication network of Beijing Daxing International Airport. This will create the most advanced airspace communications network in the region. 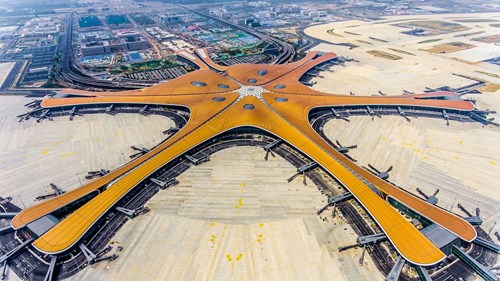