Austro Control and Frequentis are setting another milestone in their decade-long cooperation by launching a drone management solution to enable their safe integration into Austrian airspace. The system will be operational by early 2023.

The number of drones in Austrian airspace is ever increasing. To ensure that drones continue to travel safely in the future, dedicated traffic management systems with automated solutions are needed. Austro Control is relying on the development of a UTM (Unmanned Traffic Management) system with Frequentis.

The cooperation is the result of an extensive public tender process in which several leading companies from the technology sector have participated since last autumn.

The new system offers advantages for drone pilots on the one hand and for Austro Control's air traffic controllers on the other hand. The new digital traffic management system ensures that flight clearances for drones are handled faster, safer, and more efficiently in the future in an area where both manned and unmanned aircraft are on the move.

"Drones are among the central topics of the future for Austro Control. The possible applications in the commercial sector know hardly any limits. At the same time, there has been a veritable drone boom in the private sector for several years. These developments require a redefinition of airspace. With the traffic management system, we will make drone flying in Austria even safer in the future," says Austro Control Managing Director Valerie Hackl.

"The new UTM drone traffic management system is paving the way for an ecosystem that meets the increasing demand for drone flights in a regulated airspace, thanks to the possibility to embed a wide range of services and the connection of additional user groups, such as blue light organisations," explains Norbert Haslacher, CEO Frequentis. "We are pleased to implement this forward-thinking project together with our long-standing partner Austro Control." 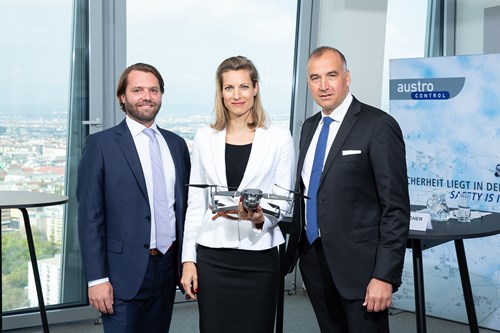 "With Frequentis, we are gaining a partner with an excellent reputation as a reliable and experienced technology provider in aviation. With the implementation of the new drone traffic management system, we will take a significant step towards the future. Through digitalisation and automation, we are paving the way for the safe and efficient integration of drones into the airspace," says Austro Control Managing Director Philipp Piber.

With Frequentis' cloud-based UTM solution, future communication between drone pilots and Austro Control will be based on digitalisation and automation. In the first stage of the joint project, the digital transmission of drone flight plans and the release of drone flights into controlled airspace by air traffic control are on the agenda. Subsequently, in line with EU regulations currently being implemented, drone identification and warnings of restricted airspaces will be activated in the system.

The most important features and services that will be implemented gradually over the next few years are:

From the perspective of the Federal Ministry for Climate Protection, Environment, Energy, Mobility, Innovation and Technology, the project to develop a drone management solution for the safe integration of drones into Austrian airspace is welcomed and supported. The cooperation between Austro Control, which has the "know-how" for the safe guidance and control of aircraft, and Frequentis, as an experienced technology provider in aviation, will lead to solutions that will be trend-setting for the future of aviation, especially in the control of manned and unmanned aircraft, not only in Austria.

The award procedure for this contract to Frequentis was accompanied by Harald Küchli from the law firm SHMP Schwartz Huber-Medek Pallitsch Rechtsanwälte GmbH. The commissioning and thus the use of the new system for Austro Control air traffic control and for drone pilots is planned for the beginning of 2023.