The SESAR 2020 project PJ05 “Remote Tower for Multiple Airports” aims to bring the concept of remotely controlled multiple airports to the next maturity level. From 19th to 27th March 2018, the Lithuanian ANSP Oro Navigacija (ON), DLR and Frequentis AG performed a validation exercise for multiple Remote Tower at DLR in Braunschweig, to test the concept’s operational feasibility.

In the test setting, one air traffic controller provided ATS to three Lithuanian airports simultaneously. In a real-time simulation at the DLR Air Traffic Validation Center, six Lithuanian controllers managed extensive traffic in a mixed VFR/IFR environment. They were provided with a newly developed flight strip planning system from Frequentis AG, a three-fold radar and a three-fold outside view, with integrated voice communication system and augmented weather information.

The validation exercise was planned and put into practice by human factors and simulation experts of DLR’s Institute of Flight Guidance. In the V2 validation, the ATCOs ran four different scenarios, each lasting 50 minutes, with diverse use cases. Equipped with several support functions, such as weather, aircraft and vehicle information overlays (labels) on the panoramic screens, PTZ (pan-tilt-zoom) cameras, airport associated squelch indication, and the Frequentis planning tool, controllers handled up to 22 movements per scenario, both air traffic and ground movements.

ON air traffic controllers tested the Frequentis system in 2-day sessions each. For this test, the interaction screen was adapted to the ON controller’s working procedures, so they had a split arrival and departure timeline available during the validation. The exercises were run in pairs, for the observing controller to analyse safety, workload and overall well-being of the executing controller.

The ON ATCOs comments, such as “very innovative, new system, that can have a future” as well as “interesting, like driving a new car”, radiate optimism and confidence that these research activities are an important step into the right direction.

Thanks to the results from this V2 level, it is planned to take the operational feasibility of Multiple Remote Tower to the next step. Therefore, to collect even more controller feedback and to challenge them with particular, more detailed use cases, which have not been previously tested, air traffic controllers from another air navigation service provider will evaluate the concept on a V3 level at DLR’s simulation platform with an adapted planning tool by Frequentis in November 2018. 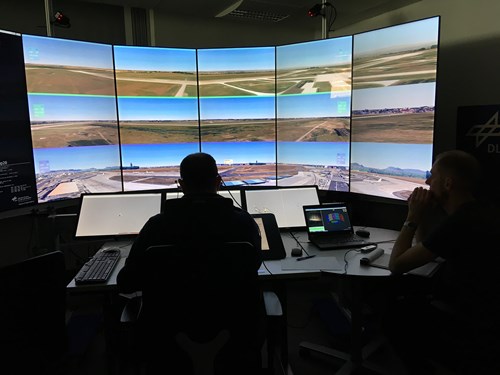