Today will see the launch of the Gordon Bennett Gas BalloonChallenge 2011 from the South of France. A competition which ended in tragedy last year with the loss of the American ballooning pair, Carol Rymer-Davis and Richard Abruzzo.

The 55th Coupe Aeronautique will start in a challenging area of the Alps at the airfield of Gap-Tallard. The Meteorlogical predictions are that a quick asscent will be needed to traverse the surrounding mountains. Such a start to this years competition could mean that the challenge will be relatively short. The reason for this is that the pilots will need to utilise many sand bags early on to gain sufficient altitude to avoid the Alp mountains. Leaving them less weight to lose later in the competition.

The Coupe Aeronautique Gordon Bennett is a challenge decided by the gas balloon which can traverse the longest distance in the time allowed within a specified airspace.

The field this year is severely depleted compared to last year's competition but the top teams still seem to be present.

The 2009 winners Vincent Leys and Sebastien Rolland are representing the host country in France 01. Vincent also had a hatrick of wins in 2001-2003 and another win in 1997. Leys / Rolland are the reason the GB2011 is being hosted in France as winners in 2009.

The first ever British winner for Great Britian (2008) is again competing in the only British Balloon this year. Hempleman-Adams is this year flying again with his new partner for the last 2 years Simon Carey who came in together in 11th in 2009 and 3rd last year.

And representing Germany is the 2000,1996 &1995 winning pilot Wilhelm Eimers with his co-pilot Bernd Lansmann. 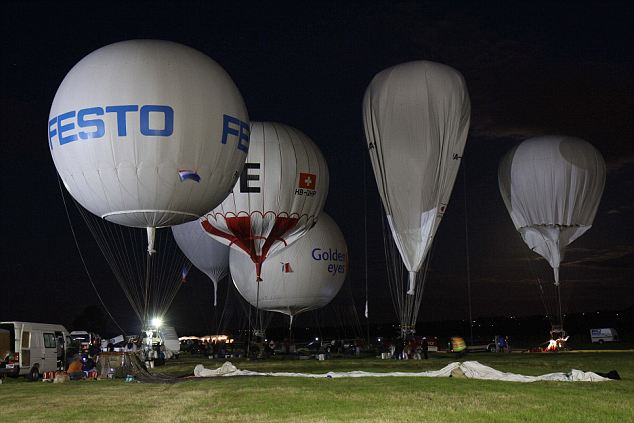 All balloons are carrying Mode S transponders which can therefore be tracked by ANSP's. Also the supporting staff are in communication at all times with the balloons.

The problems with the USA team last year was not helped due to equipment failure so I hope all ATC staff will look after the balloons this year whilst they are under their control.

We wish all the teams a safe and enjoyable passage and hope that our members will spread the word to their colleagues in the Control Centres through which the teams are traversing.