Aviation consultancy Helios today announced the opening of a new office in Žilina Slovakia as part of its ongoing growth in Europe.

“We have had a presence in Slovakia since 2004, but this new office provides bigger and better facilities for our growing team and for our customers, including training and conference rooms,” said Nick McFarlane, Helios Managing Director. “The office is within a newly renovated and beautiful building with an interesting history. Formerly Czechoslovak Commercial Bank, its vault was used to hide the Bohemian Crown Jewels from invading forces during WWII.”

A ribbon-cutting ceremony was performed by His Excellency Mr Andrew Garth, British Ambassador to Slovakia and honorary president of the British Chamber of Commerce in Slovakia. Then, to showcase the new facilities, Helios hosted a customer seminar on ‘Hot Topics in Aviation’ later the same day.

The Slovakia team is led by Juraj Jirků, who has been with Helios since it first established a base in Slovakia. The team contributes to work undertaken for clients located in many countries in the region, including Slovakia, the Czech Republic, Poland and Croatia. Recent joiners include: Ľudovít Gábriš formerly with the Slovak CAA and Petr Homola a former military air traffic controller. 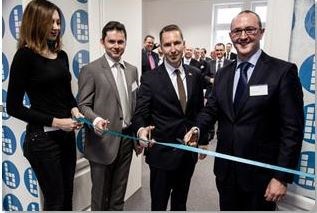