Central-Europes only simulation centre is operating under the aegis of HungaroControl from 10th of May in Budapest. 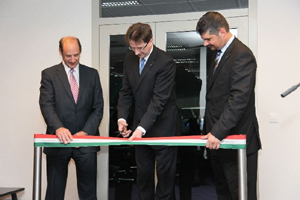 The centre, equipped with state of the art technology, was opened by Mr. Pál Völner, Secretary of State responsible for infrastructure, Mr. Joe Sultana, COO of Directorate Network Management of EUROCONTROL (European Organization for the Safety of Air Navigation), and Mr. Kornél Szepessy, CEO of HungaroControl (Hungarian Air Navigation Services) in the presence of the leaders of Air Navigation Services in the region. The aim of the Centre of Research, Development and Simulation (CRDS) is to aid the regional cooperation and the establishment of the Single European Sky. 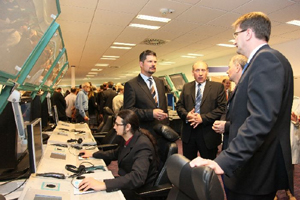 To make the European air navigation more effective and competitive, the airspace presently segmented along the borders will be organized into functional airspace blocks within the Single European Sky implementation program. The integration requires unprecedented cooperation from the Air Navigation Service Providers and controllers and it makes changes necessary to numerous procedures and processes, also the shortening of the air navigation routes. HungaroControls innovation centre opened today enables the testing of newly developed theoretically secure processes and air traffic controller procedures before their actual usage.

Hungary does its very best to enhance the establishment of the Single European Sky, and for the successful operation of the Central-European functional air space block, the treaty of  which we signed last Thursday together with the countries of the region said Mr. Pál Völner Secretary of State responsible for infrastructure on the opening ceremony. The Hungarian Air Navigation Service Provider invests great efforts in the advancement of the whole Central-European air navigation and the regional cooperation. A great example of this is the CRDS, an innovation centre which is open for all service providers added the Secretary of State.

The increase in air traffic and the need for integration enhance the demand for research-development, simulation and training, while the professional requirements are high and the training and simulation capacity is very restricted. There is only one institute which is comparable in size and technology to the one in Budapest and it is located next to Paris. For this reason it is especially important that we provide the necessary world standard infrastructure for advancement and cooperation in Central-Europe, in the most intensive period of the integration revealed the importance of the investment Mr. Kornél Szepessy, CEO of HungaroControl.

The opening was attended by leaders of Air Navigation Service Providers of the Central-European region. Mr. Joe Sultana, COO of Directorate Network Management of EUROCONTROL emphasized in his speech that the CRDS tightens the professional cooperation of the service providers not just in the region, but also throughout Europe.

First of all the effects of an already prepared route-change will be tested by the professionals of HungaroControl at the CRDS. By running the simulation in realistic environment it will be possible to find out how the optimized route for airlines will affect in practice the work procedures of the air traffic controllers and also if it causes any difficulty in the handling of air traffic.
your benefits?