GBAS flight trials have been successfully carried out by Indra at Hong Kong International Airport (HKIA) for the Civil Aviation Department of Hong Kong. The flight trials, which took place during November and early December 2018, mark a new milestone in the path towards making GBAS the standard for landing systems.

Indra’s NORMARC GBAS ground equipment was used for the flight trials, and the company was also responsible for providing flight procedures and ionospheric analysis, with IDS (Ingegneria Dei Sistemi) and the German Aerospace Center (DLR) as subcontractors.

Flight inspection verified that the GBAS performance met the intended operational requirements. Four required navigation performance (RNP) to GBAS landing system approach procedures were designed and validated by flight check to demonstrate GBAS’ capability, with three of the procedures targeted for the purpose of flight trials.

“The flight trials have been successful, both technically and operationally, and show that it is realistic to implement GBAS in this region. Indra believes GBAS will provide airports and airlines with significant cost, capacity and environmental benefits. In this respect, we regard the project in Hong Kong as important for the entire industry. We wish to thank CAD and Cathay Pacific for acting as pioneers, and for such a professional and efficient organization of a challenging endeavor”, says Linda Lavik, Product Manager at Indra.

Indra was the first company to start delivery of commercially operational satellite landing systems, used in Norway since 2007. “Indra is working proactively to get GBAS GAST D approved for Category III operations. After ICAO requirements for GAST D became effective in November 2018, we are confident an approval is realistic”, comments Linda Lavik.

The Civil Aviation Department of Hong Kong regulates the civil aviation activities and is the air navigation service provider in Hong Kong. In 2018, Hong Kong International Airport (HKIA) handled 74.7 million passengers and 427,725 flight movements. HKIA was also recognized as the “Airport of the Year 2018” by Air Transport World and “Best Global Airport” at the Asian Freight, Logistics and Supply Chain Awards by Asia Cargo News. 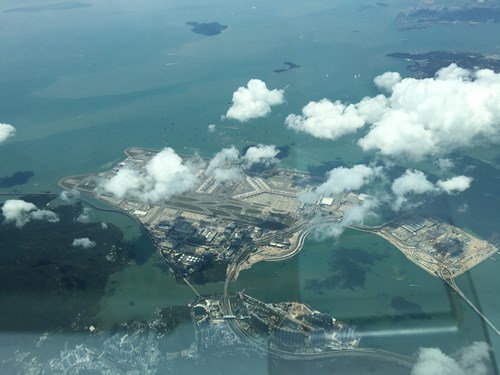