Indra, one of the leading global technology and consulting companies, has won new contracts to deploy up to thirty-five navigation aid systems in China, which will reinforce safety at airports and along major air routes.

The new contracts bring the number of systems of this type deployed by the company in China to over 950, in addition to the automation systems implemented in control centers and towers, surveillance radars, communications and information systems, which takes the total amount of ATM systems deployed over the 1,000 mark and bolsters the company’s leadership in the Chinese ATM market.

Specifically, Indra will deliver DVOR and DME systems that enable aircraft to determine the angle and distance they are from a specific point on the ground, in order to perform precision approaches to airports and track airways once they are en route.

The new systems will be supplied by Indra's team in Australia and deployed with the help of the company's professionals in Beijing. The work carried out from Indra's centers in these two countries has enabled the company to overcome the mobility constraints imposed by Covid and continue providing a service as normal to its customers throughout the Asia-Pacific region, a market in which aviation is already recovering.

Indra's NORMARC family of systems has become a true industry standard for quality and high reliability. This family of solutions is preferred by navigation service suppliers in China and a major portion of the world. In Australia alone, the company has deployed over 300 navaids systems, while Indra’s ILS instrument landing system have backed more than 200 million safe landings, in 1,400 airports worldwide.

Indra is a leader in China's air traffic market. The en route control centers in Chengdu and Xian manage the upper airspace of eight regions of the country - totaling 4.2 million square kilometers - with Indra systems.

The company has also equipped the Chengdu terminal area control center with the Indra Air Automation system. In the field of air surveillance, it has deployed a radar network which monitors the air movements in over 60% of China.

The future of navigation

Indra is already working on the navigation aid systems of the future. These include the GBAS augmentation systems (GAST D category), which offer a much more efficient, precise and safe approach trajectory for landing.

The company is part of the European GBAS Alliance that is promoting the adoption of this technology at airports on the continent. In 2018, it also conducted flight tests with this system at Hong Kong International Airport (AIHK) in collaboration with the Civil Aviation Department of this region. Last year, it conducted tests at Tenerife Norte Airport together with the Spanish air services provider, ENAIRE.

Each GBAS system offers the capacity to manage up to 48 approaches simultaneously, covering all the runways and heliports of an airport, unlike ILS, which must be installed at the head of each runway. Its precision also allows for steeper and shorter descents, which helps to save fuel and reduce noise pollution. 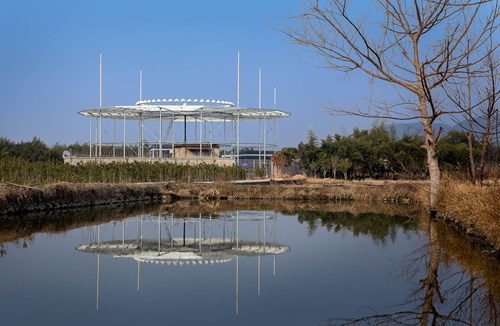