Indra is a key partner of the European GBAS Alliance that will start to deploy this year state-of-the-art satellite-based landing systems at airports all around Europe to increase runaway capacity by up to 6% in peak traffic periods.

This technology allows aircrafts for steeper approaches, which saves fuel and reduces noise and CO2 emissions. Further, GBAS improves airport capacity by letting approaching aircraft use different glide slopes to avoid wake turbulence left by precedent aircraft in the runaway. According to research by EU’s SESAR initiative supported by Eurocontrol simulations, this can lead to runway capacity increase between 2 and 6%.

The European GBAS Alliance includes airports, airlines, air navigation service providers, and air and ground manufacturing industry working for a coordinated and synchronized deployment of Ground Based Augmentation Systems (GBAS). The ambition is for deployment preparations to start already this year, with increasing force from 2020. The focus is particularly on precision approaches in low-visibility conditions.

GBAS is recognized as a supplement and, in the future, the replacement of Instrument Landing Systems (ILS).

Indra has been a driver for GBAS development for years, and is one of the initiators behind the European GBAS Alliance. It contributes with one of the technological pillars; the NORMARC GBAS system is an Indra Air Solution capable of guiding aircraft even in low visibility conditions (CAT II and III). The technology is ready, and the focus now is on getting the infrastructure and regulatory framework in place.

“The great response to this initiative is very encouraging”, says, Hugo Moen, GBAS General Sales Manager at Indra. “In spite of the indisputable benefits to everyone, we need a collective effort to get out of a “chicken or egg” situation. Both airlines and airports need to make some investments, but airlines are reluctant to invest in GBAS receivers for aircraft as few airports have the required infrastructure. Likewise, airports or ANSPs are not investing since few aircraft can make use of the system.”

GBAS differs from ILS in being based on GNSS instead of conventional radio signals. Whilst ILS signals can be affected by topography and other physical objects, GBAS has no critical or sensitive areas. This allows for higher capacity during precision approaches, reducing the risk of diversion, cancellation and go-around.

“GBAS enables steeper and shorter approaches. Precision landings can be performed at airports where this has not been possible due to topography or other reasons. In Norway, we have used GNSS-based landing systems at 17 airports for many years, with great results. It is nice to see the industry working together so more countries can benefit from this new technology”, comments GBAS Product Manager Linda Lavik from Indra.

Indra is the only company in the world with a technology portfolio that encompasses all the phases of a flight, from take-off to landing. Indra Air Solutions brings together a set of solutions structured to help each navigation service provider construct a sky fully adapted to their operational needs. They are organized in the following lines: Indra Air Automation, Air Communication, Air Navigation, Air Surveillance, Air Information and Air Drones. 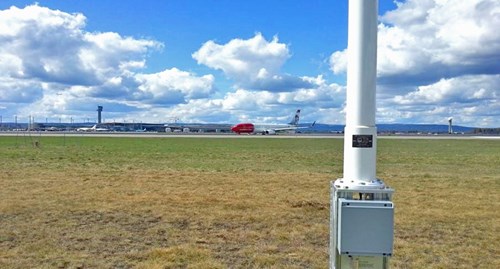